NORTH JUDSON, Ind. -- A Starke County woman is under investigation for making years of overpayments to her salary as Wayne Township Trustee.

ABC57 News has been digging deep into township government. Our investigation has examined hundreds of documents trying to figure out how so many townships often go unchecked. During that process we stumbled upon a 2017 State Board of Accounts audit that raised a lot of questions. 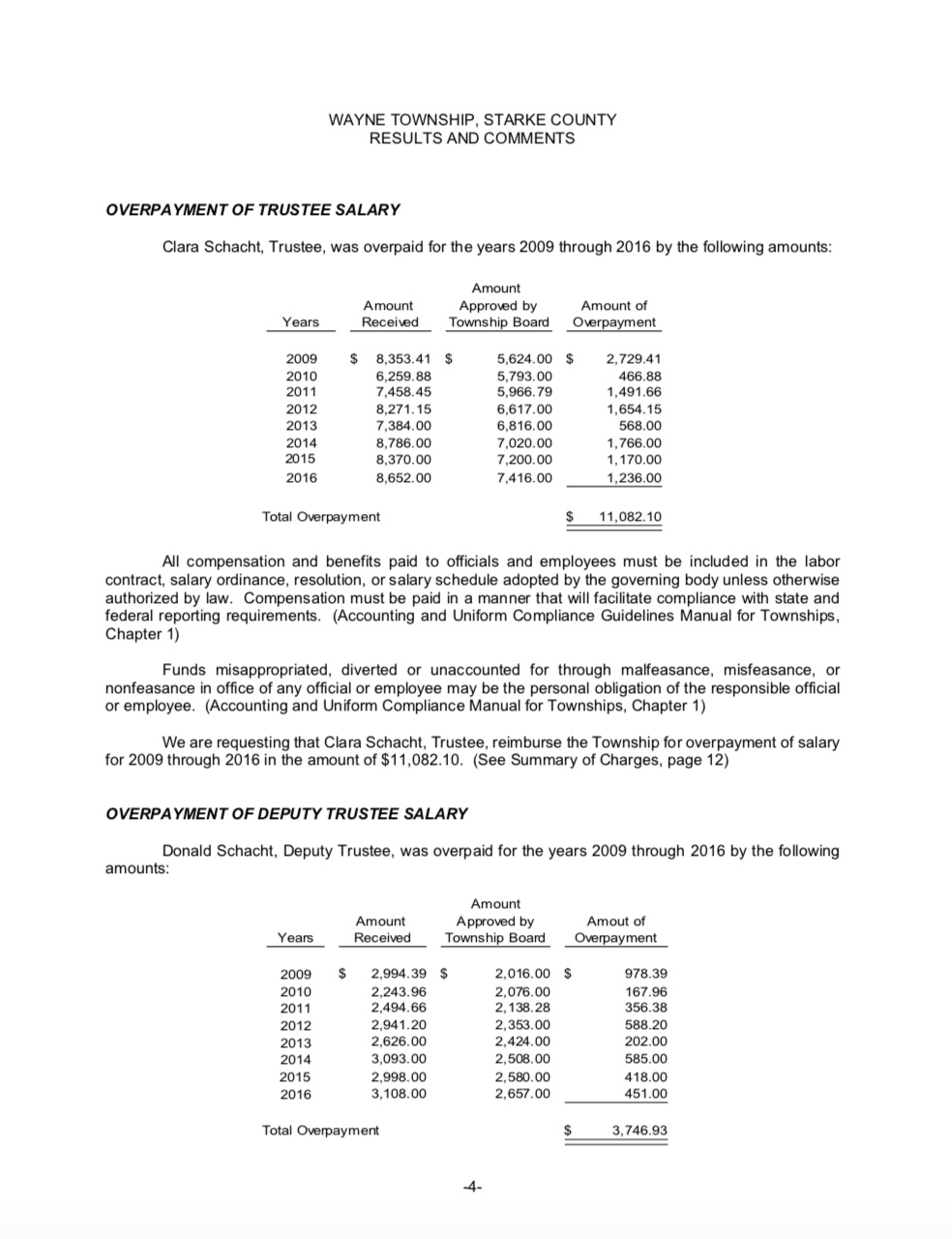 During that same time Deputy Trustee Donald Schacht was also overpaid by $3,746.93.

Indiana's nepotism law (IC 36-120.2-15) allows township trustees to hire up to one relative if the township office is located in the trustee's personal residence.

The Schacht's North Judson home is listed as the official offices for Wayne Township. According to the State Board of Accounts report, Clara Schacht also overpaid the office rent by $5,450. Since the office is also their home that means more tax dollars that went right into their pockets. 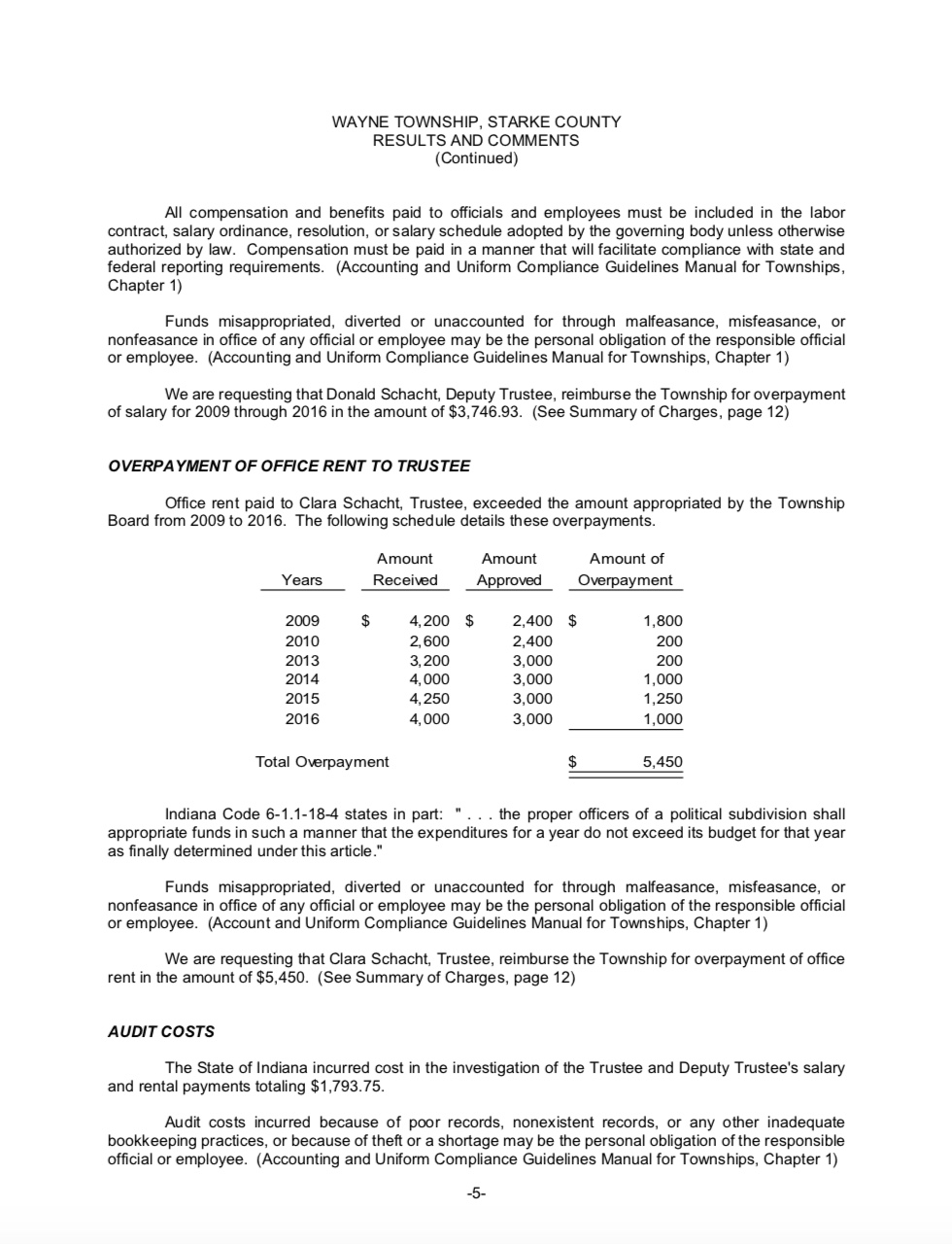 According to the State Board of Accounts report, the overpayments to the Schachts and the office rent, along with the costs of the audit, add up to $22,072.78. 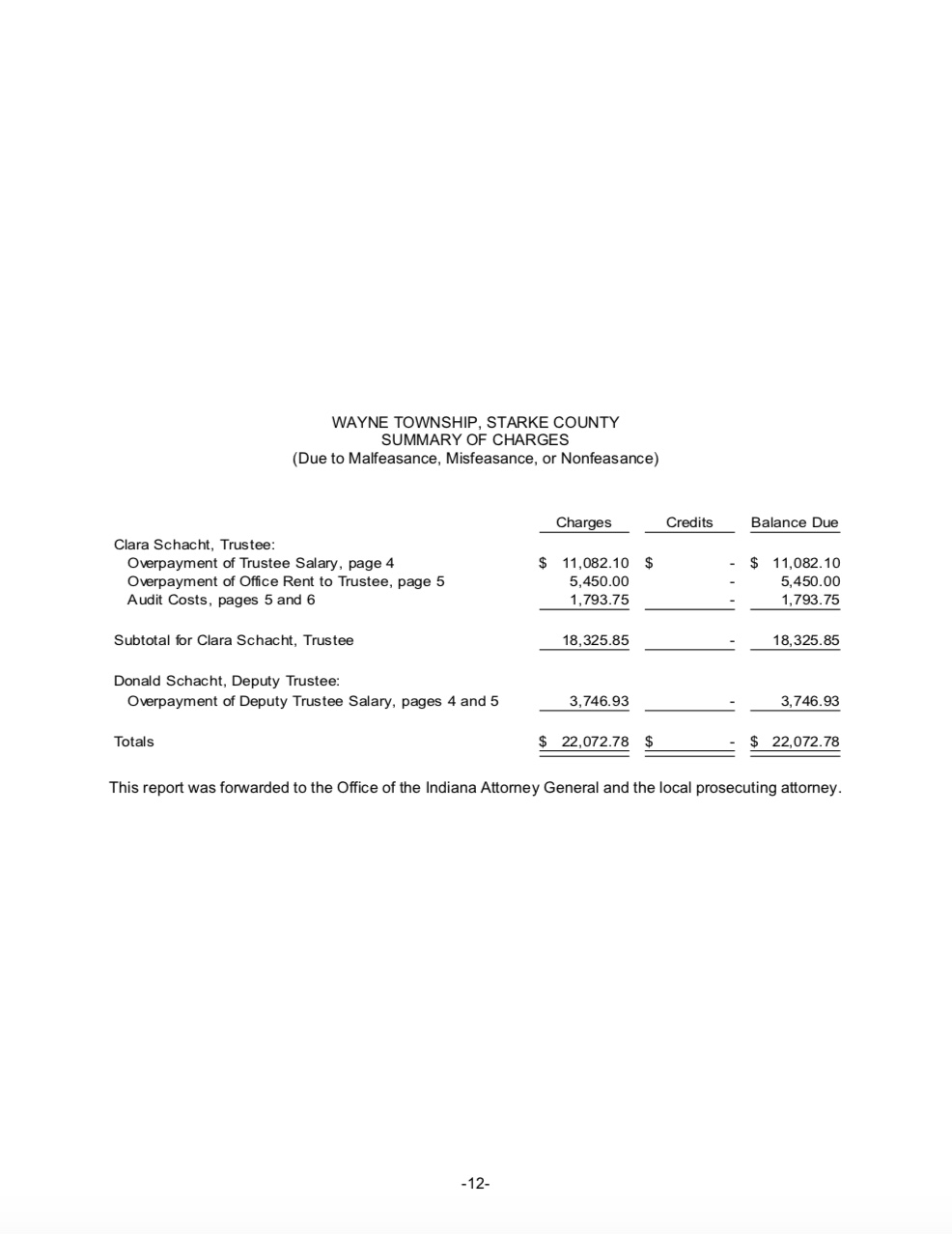 ABC57 attempted to reach the Schacht's at their home and by phone. We have been unable to reach them.

We also reached out to the three Wayne Township Advisory Board Members. Board Member Marvin Peter says, he is aware of the report, but is unable to comment.

ABC57 did obtain a copy of a default judgement filed against the Schacht's by the Indiana Attorney General's Office in December of last year.

According to the filing, the Schacht's are now on the hook for the overpaid amounts, damages and interest -- all totaling up to almost $73,871.63.

ABC57 spoke to several people in Wayne Township who say they aren’t surprised by the allegations.

Roseman has lived in Wayne Township his entire life -and he says, he’s had enough.

“They waste a lot of money on stuff and then they have people like that taking it out of the taxpayer’s pockets," said Roseman. "It ain’t right.”

Starke County Prosecutor Nick Bourff is now trying to determine if their actions are criminal.

In an email to ABC57, Bourff said, "We've been working with a Detective from the Indiana State Police on this. My Chief Deputy has been in communication with the AG's office, as well as the ISP on this investigation."

This isn’t the first time accusations like this have come up. A State Board of Accounts audit from 2006 found the Schachts overpaid their salaries and rent by $4,800 in 2005 and 2006. No charges were ever filed then.

As for these latest accusations, the prosecutor's office is just waiting for the final case report from the Indiana State Police detective. The results of that investigation will determine whether criminal charges will be filed and if the Schachts will be removed from their positions.

Trustee Clara Schacht is up for re-election this year and so far she has not filed papers to run again for the position.