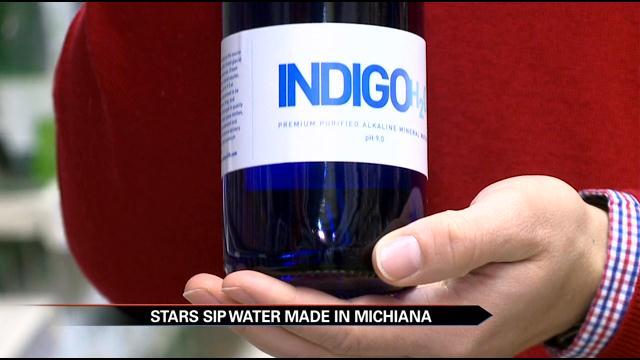 An Elkhart businessman hit what he calls an all-time high. Bottled water pulled from a well in Elkhart is in the hands of celebrities at the Oscars.

The water is called Indigo H2O.

On the night of the Oscars, it is bringing national attention to Michiana.

The bottled water appeared first at the MTV Music Awards then the Golden Globes, now they are at the biggest award show in Hollywood.

Yuri Cataldo said all it took was a little networking.

“No, this is something I never thought would happen,” said Cataldo.

A small-town guy, Cataldo is getting the opportunity of a lifetime from Elkhart, Indiana to Hollywood, California.

“It's only the beginning,” said Cataldo, the founder of Indigo H2O.

The product was a result of his own health issues.

“I've always been fascinated by bottled water because of my own personal health problems and health struggles,” said Cataldo.

It was born as Indigo H2O.

The water is pulled from underneath the Crossroads of America.

“The ground that we're on taps into the glacier aquifer that runs underneath Indiana,” said Yuri Cataldo.

His bottled water project turned business has been a work in progress since 2012.

It's on the shelf at Whole Foods in Mishawaka.

The chain is the only big name that gave his home-grown business idea a chance.

“The very first major store who loved our product enough to sell it on their shelves,” said Cataldo.

Their faith in the blue bottled aqua is paying off.

“There was a giant display at Whole Foods over the weekend and now we're down to only ten bottles,” said Cataldo.

“Sales are nice, profits are nice, but supporting a local company like this and being able to be connected with a company that's having such great success that's what we're really excited about,” Adam Ziegler, the marketing specialist at Whole Foods.

It is success that Cataldo never imagined; the rich and the famous having their hands on a special made creation from right here in Michiana.

“It really says that there are a lot of hidden gems in Michiana,” said Cataldo.

Gems that Cataldo is ecstatic to display across the map, because no matter where he goes, he will never forget where he came from.

“I'm proud to be from Michiana and I'm proud to showcase what Michiana has to offer all around the world,” said Cataldo.

Placing it at one of the best bottled waters in the world.
Share this article: