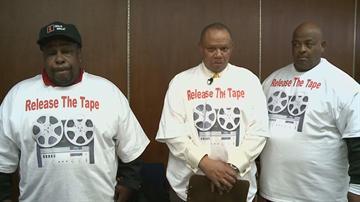 SOUTH BEND, Ind. – After a meeting with representatives of Rev. Jesse Jackson’s Rainbow PUSH Coalition, Mayor Pete Buttigieg has pledged to join in efforts to push for a federal investigation into the South Bend Police Department phone call recording scandal that led the controversial demotion of Former Chief Darryl Boykins.

Community activists, including Mario Sims, have been working for weeks pushing for the public release of recorded phone calls that allegedly contain police and St. Joseph County Metro Homicide detectives using racial slurs in reference to Boykins and other members of the department.  Karen DePaepe, the former communications director, was fired for her role in taking the recordings to Chief Boykins.  With the news that Mayor Buttigieg is backing off his stance that the tapes not be released, activist said they’re cautiously optimistic.

“It went beyond our wildest expectations to have a concession made by the mayor to join in to our request to the federal government to begin an investigation,” Mario Sims described.  “We’ll be working in the coming days to verify, in fact, that the mayor is going to honor his call.”

Sims described mixed feelings about the involvement of Rev. Jesse Jackson and the Rainbow PUSH Coalition.

“Obviously it’s exciting that Reverend Jackson has deemed this important enough to come in support of what we’ve been asking for,” Sims explained.  "It's also sad that we haven't had any organization here locally that we could've gone to initially, it required this drastic and dramatic action to go beyond the state of Indiana."

With the mayors pledge of support, Sims said the scandal has moved closer to finally revealing the full scope of what may or may not be on the recordings.

"We haven't been able to get a clear understanding, other than what Mrs. DePaepe has said is on those tapes, what is on those tapes,” described Sims.  “Now we have the opportunity to have the tapes aired, to have the federal government determine if there is criminal activity that warrants prosecution."

Since the scandal broke out, Sims and other activists have said their focus is not on the racial aspects of the controversy but on pushing for open government.  Now, he explained, with the involvement of the Rainbow Push Coalition that aspect of the scandal may come to the forefront of the issue.

"You had some law enforcement officers feeling comfortable enough to make these types of criminal, unethical and racist statements,” he explained.  “So to that regard it did involve race."

Moving forward Sims said he and his supporters are remaining vigilant and will continue to push for the release of the tapes.

"We're just going to be cautious, we're going to continue to move forward with working with the mayor at this point to make sure the tapes are played,” Sims affirmed.  “We'll just let the cards fall where they may."

Rev. Jackson is expected to visit South Bend to discuss the tape scandal sometime in the next week.