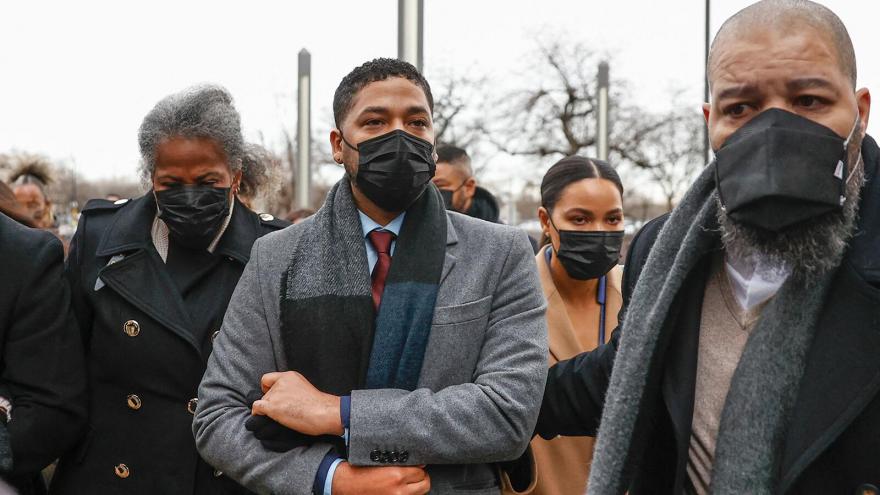 (CNN) -- Actor Jussie Smollett was found guilty Thursday on five of six felony counts of disorderly conduct for making a false report to Chicago police that he was the victim of a hate crime in January 2019 -- an attack prosecutors said he staged.

The jury of six men and six women deliberated for more than nine hours over Wednesday and Thursday.

Smollett, dressed in a suit and tie, appeared rigid after the verdict was read in court late in the afternoon. He did not move and was seen gazing straight ahead. His fingers were interlaced and his hands were on the table. He didn't look at his family or the judge, instead focusing in the direction of the jury.

A disorderly conduct charge for a false crime report is a Class 4 felony and punishable by up to three years in prison and a $25,000 fine. Cook County Judge James Linn will have discretion in imposing a concurrent or consecutive sentence for each count at a later date.

Special prosecutor Dan Webb said at a news conference that he was proud of the jury.

"Mr. Smollett would not have lost this case as he did today unless the jury found that he lied to them," he said. "The fact that he came up with a completely ridiculous story to explain his misconduct did not apparently have an impact on the jury's verdict."

Webb said he couldn't predict whether follow-up perjury charges would be filed against Smollett for his trial testimony but said people who are convicted of a crime are not normally charged with perjury.

Smollett was found guilty of disorderly conduct for making false reports to Chicago police officer Muhammad Baig and Detective Kimberly Murray on the day of the incident. He was acquitted of making of a false report to another Chicago detective weeks after the alleged attack.

Defense attorney Nenye Uche called the verdict inconsistent, saying the jury cannot find Smollett lied in five instances but did not in the sixth.

"It's pretty disappointing, what happened," he told reporters at the courthouse. "But we remain confident that we're gonna come back and he's going to be vindicated."

As jurors were cleared and court began to empty out, Jurnee Smollett, the former "Empire" actor's sister, was the first to embrace him. Soon after, he walked over and hugged his mother for a long time.

He left the courthouse without answering questions.

The next court date is set for January 27 for post-trial motions.

On January 29, 2019, Smollett, who is Black and gay, told authorities he was the victim of a racist and homophobic attack near his Chicago apartment early that morning.

After the story broke, many celebrities, politicians and advocacy groups rallied behind the 39-year-old actor, who, according to police, said the alleged attackers attacked him at 2 a.m. as he walked back from a Subway sandwich shop.

Chicago police investigated the case as a possible hate crime but soon said the actor orchestrated the incident. They said he paid two brothers he knew from the TV show "Empire" to stage the incident for publicity. Smollett said he paid the brothers for training advice and nutritional tips.

The brothers, Bola and Ola Osundairo, were among seven witnesses for the prosecution. The brothers testified that Smollett directed them and paid them to stage the attack in an attempt to get media attention.

They said that they fake punched him, poured bleach on him, put a noose around his neck and used racist and homophobic slurs -- because he told them to.

"Who was in charge of this thing?" Webb asked.

Ola Osundairo told jurors that Smollett "had this crazy idea of having two MAGA supporters attack him," and that he wanted "to put that on social media."

Smollett claimed after the attack that one of the men exclaimed, "This is MAGA country," police said.

Over eight hours on Monday and Tuesday, he laid out his version of the incident, attempted to cast doubt on the brothers' true motivations and explained his distrust for police.

"Have you ever planned a hoax?" one of his attorneys asked.

"Never in my life," Smollett said.

Uche said during closing arguments Wednesday that the Osundairo brothers were lying in court about Smollett and were only interested in their own fame and attention.

"They're the worst type of criminals," Uche told jurors.

Attorney Gloria Schmidt Rodriguez said the Osundairos were thrilled with the verdict.

She urged Smollett, whom she praised as warm and generous, that "it is time to cut the act. Just come clean."

People will forgive you, she said in comments directed to the actor.

The attorney said the brothers would address the results when they are ready.

Ola Osundairo attended the verdict reading while his brother is in Louisiana to fight in a boxing match.

Smollett was initially indicted in March 2019 on 16 counts of felony disorderly conduct. But Cook County State's Attorney Kim Foxx's office suddenly dropped all charges weeks later, saying he did community service, lost his $10,000 bond and was no danger to the community. He also had no previous felony convictions.

Smollett's character was written off "Empire," which ended in 2020, soon after his arrest and though he has since directed and produced a film, he has not appeared on screen again.

He was indicted on new charges in February 2020 when the special prosecutor looked at the case after debate as to whether Smollett received preferential treatment from the state's attorney's office.

Smollett still faces a civil suit from the city that demands reimbursement of $130,106.15 for the cost of investigating his reported attack. He filed a countersuit in November 2019 that eventually was dismissed.

A statement from city officials Thursday said they will still seek to "hold [Jussie] Smollett accountable for his unlawful actions."