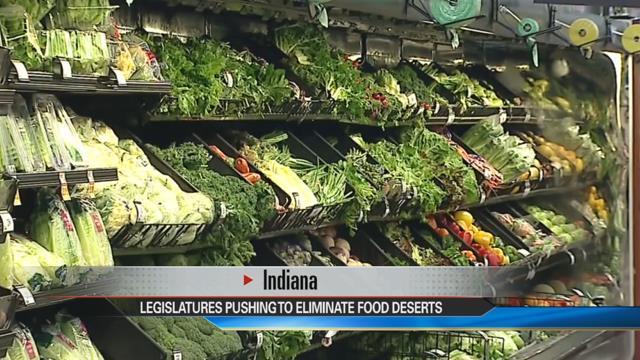 Food deserts across America are a nationwide issue. In the United States it is estimated that 23.5 million people live in food deserts, that is according to the USDA's Economic Research Service.

In Indiana there are many areas where residents live 10 or more miles away from a grocery store that sells fresh food. Indianapolis has been named as one of the worst food desert areas in the country.

Often the people impacted by food deserts are low-income, which makes getting fresh, nutritious food difficult.

Food deserts are not limited to cities.

"You know, when people hear the term 'food desert' they automatically think of 'urban,' but in Indiana and Illinois as well, a lot of food deserts are rural. We've got them all over the state of Indiana, in many different types of communities," said Randy Head, a Republican Logansport Senator.

Head authored a bill that he believes will help to eliminate food deserts.

It is called Senate Bill 15 and if passed, it would set up a grant and loan program to help new and existing businesses offer fresh and unprocessed foods within a food desert.

"For instance, if a convenience store wants to get coolers to offer fresh produce, this kind of thing would help them buy the coolers. They'll be evaluated annually to make sure they're doing what they say they're going to do with the money; and it's got a claw-back in it, so if they're not doing what they say they're going to be doing or what they should be doing with it, they owe all that money back to the state," said Head.

This would give grant money to those businesses that want to sell healthier options in their stores.