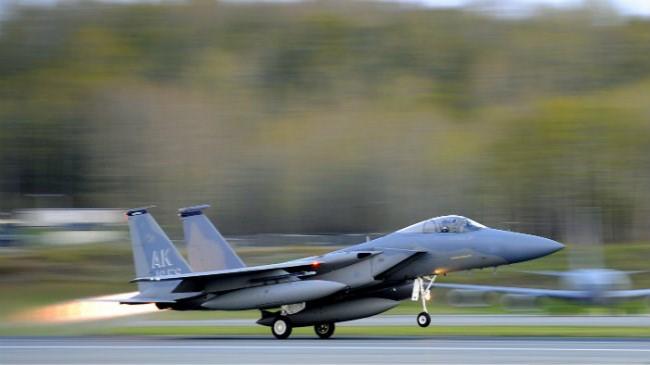 (CNN) -- A $12 billion makeover is underway for the US Air Force's 1980's-era F-15 fighter, a step towards upgrading an air fleet that one military official recently called the "smallest, oldest and least ready" in history.

The F-15 has long been hailed as the most successful dog-fighting aircraft in US history, boasting an undefeated air-to-air combat record with more than 100 aerial combat victories, according to Boeing, the plane's primary contractor and developer.

The Air Force initially planned to replace the entire F-15 fleet with the fifth-generation F-22 Raptor, but production of the stealthy aircraft was halted in 2009 and only 188 of the 749 F-22s purchased by the Pentagon were ever produced.

With rival nations like China and Russia quickly closing the technology gap that has allowed the US to rule the skies for decades and fewer F-22s than expected at its disposal, the Air Force has decided to invest in a major facelift for the battle-tested F-15 to help fill the void by extending its lifespan through 2040.

Many of the upgraded F-15's will also be modified to carry 16 missiles, rather than the standard eight, giving those aircraft greater lethality, said Boeing spokesman Randy Jackson.

"Our potential adversaries are keenly aware of the importance of air superiority to our nation's way of war," Air Force spokesman Maj. Robert Leese told CNN. "This is why they continue to seek ways to contest our advantage in the air through the development and proliferation of new weapon systems."

"To maintain this advantage, the Air Force must not only develop new systems of our own, but continue to upgrade the capabilities of our legacy systems like the F-15," he said.

While the current initiative to update the F-15 with new technology dates back to 2002 with the development of its advanced radar system, the Air Force says the process has been a gradual one, with work on the modern radio and infrared targeting programs beginning just this year.

"The process to upgrade these planes is currently being evaluated and capabilities are being developed and tested," Boeing spokesman Randy Jackson told CNN.

While the F-15 will still lack the stealth capability of the F-22, upgrades in radar technology, infrared search and track, and electronic warfare capabilities will significantly improve its ability to detect, target, and engage enemy aircraft at a tactical advantage, according to the Air Force.

And the new high-tech mission computer and upgraded radio communication tools will not only allow the F-15 to better complement and communicate with its F-22 partner on the battlefield, but are also designed to support future technology as it is developed.

"The fourth generation F-15 has an unmatched record of success in the air-to-air role, and provides the critical additional capacity needed to augment and supplement the F-22 force in support of today's air superiority mission sets," Maj. Leese told CNN.

"As the Air Force continues to review our future force structure over the coming year, balancing operational effectiveness with current budget limitations, we expect the F-15 to play a critical role in the defense of our nation for the foreseeable future," he said.

The various upgrades will finish installing between 2024 and 2030, according to the Air Force.