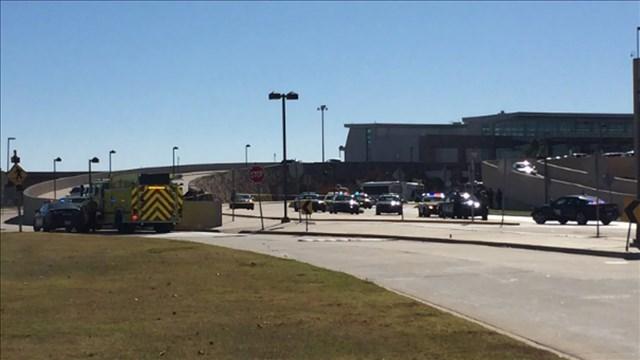 (CNN) -- An hourslong manhunt ended when the suspect in the fatal shooting of a Southwest Airlines employee at Will Rogers World Airport in Oklahoma City was found dead of a self-inflicted gunshot wound, police said.

The suspect was found in a truck, Capt. Paco Balderrama of the Oklahoma City Police Department said. The suspect has not been positively identified.

Balderrama said the shooting was not random.

"It's too early in the investigation to figure out the exact motive, although the crime does appear to be premeditated," he said.

The airline said, "The Southwest Airlines family is deeply saddened by the passing of our Southwest family member, and we extend our heartfelt sympathies and support to his family and Southwest co-workers at this time."

The airport has been closed to commercial traffic since the shooting, though one government plane landed.

Police advised anyone inside the facility to "shelter in place," a tweet from the department said. Police said they were moving people from inside the airport to a parking lot.

As evening came, the airport tweeted it was "slowly resuming operations."

Authorities went deck by deck in a parking garage, Balderrama said. The suspect's red pickup was found on the second level.

It is unclear if the shooter and victim knew each other, but "we have some basic information who the suspect might be," Balderrama said.

Shots were fired near a parking lot, he said.

The Winchester name is well-known to fans of the Oklahoma Sooners sports programs. Winchester and his son played football for the team. Mike Winchester was a punter in the mid-1980s and was a member of the 1985 national championship team.

According to the Sooners website, Mike Winchester was married and had three daughters and one son.

His son, James Winchester, is a special teams player for the Kansas City Chiefs.

His sisters, Carolyn (basketball) and Becca (rowing), also played sports for the university.

Five airlines fly out of Will Rogers to 21 destinations. The airport sees 150 commercial flights a day and more than 3.6 million passengers each year, the city's website says.

Southwest Airlines said it was canceling the remainder of its flights scheduled to depart Tuesday.