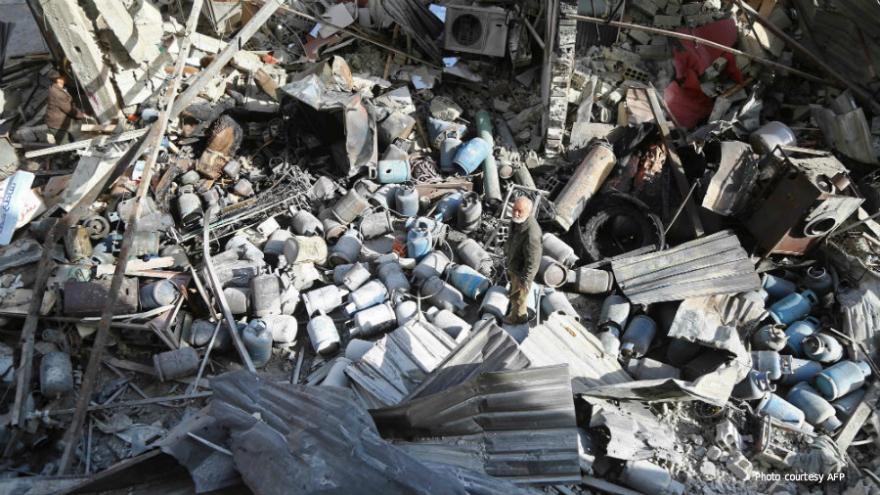 (CNN) -- Airstrikes and shelling killed at least 57 people Sunday in two separate towns in Syria, according to the UK-based Syrian Observatory For Human Rights (SOHR).

The continued fighting on Sunday came two days before a fresh round of United Nations-facilitated peace talks were to start Tuesday in Geneva, to be followed by a second session in December.

In the ISIS-held village of al-Shaafa, in Syria's eastern Deir Ezzor province, Russian airstrikes killed 34 civilians, including 15 children, SOHR said in a statement.

Al-Shaafa sits on the eastern bank of the Euphrates River, one of the last areas occupied by ISIS in the region.

Many of those wounded in the airstrike are in critical condition, which could cause the death toll to rise, SOHR added.

In their statement, the the Russian Defense Ministry says the airstrikes were aimed at ISIS strongholds, ISIS militants and ISIS military equipment.

It is unclear whether these Russian airstrikes were the same as the ones that hit the village of al-Shaafa.

Various Islamic rebel groups control Eastern Ghouta and the suburb has been surrounded by Syrian regime forces for more than four years.

Eastern Ghouta is part of the four de-escalation zones in Syria which were negotiated by the Russian, Iranian and Turkish governments in May.

In theory, residents in the area should be in a safe zone free from airstrikes, shelling and fighting.

However, the situation inside Eastern Ghouta is dire, with the UN reporting severe food and medical shortages.

Earlier in November, the World Health Organization estimated that up to 400,000 people remain besieged in Eastern Ghouta, with no way out.

"For months, the people of Eastern Ghouta have been subjected to sustained deprivation, restrictions on humanitarian access and serious human rights violations," said Elizabeth Hoff, WHO Representative in Syria. "We have now reached a critical point where the lives of hundreds of people, including many children, are at stake. If they do not immediately get the medical care they urgently need, they will most likely die."

Since the Syrian conflict began in 2011, an estimated 400,000 civilians have been killed, according to the United Nations.

The ongoing violence against civilians has been condemned by the Arab League, the European Union, the United States and other countries.

More than 5 million Syrians have fled the country and 6.3 million people have been displaced internally, according to the UN.