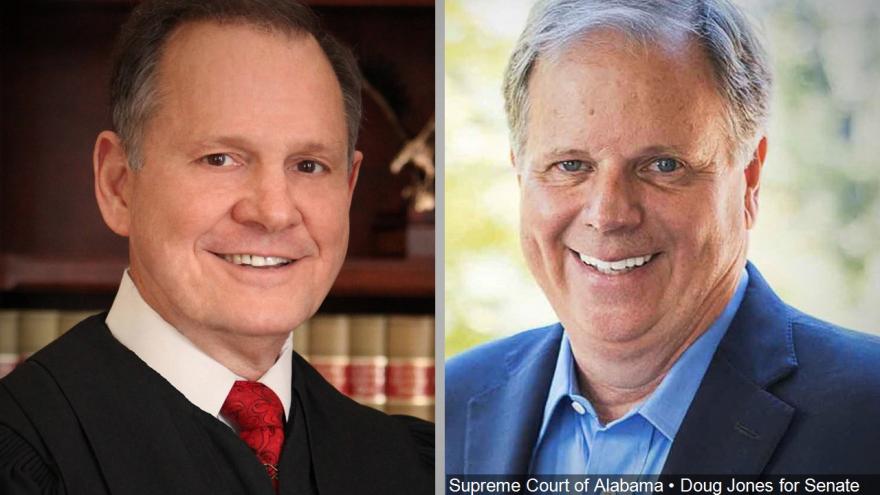 The dramatic win comes after allegations against Moore of sexually abusing teens and his history of controversial comments about women and minorities. It will be enough for a reliably red state to elect its first Democratic senator in a generation.

A Jones win will trim the Republican Senate majority to 51-49 and deals a major blow to President Donald Trump, who has backed Moore amid the national conversation over sexual misconduct.

At Moore's election night party in Montgomery, supporters milled around nervously as a saxophone-playing ally's music blared and the New York Times' results page -- scrolled down far enough to remove the newspaper's logo -- was displayed on a projection screen.

Moore had entered the room to shake hands, but left without speaking. Steve Bannon, the former White House chief strategist who has cast the race as a battle against Senate Majority Leader Mitch McConnell, who withdrew his support for Moore after the sexual allegations, was also on hand.

Moore -- following his Election Day tradition -- arrived at his polling place with his wife, Kayla, on horseback in his hometown of Gallant. He told reporters that voters "ought to go out and vote their conscience, and we'll have a tremendous turnout."

Jones voted early Tuesday morning at Brookwood Baptist Church in Mountain Brook. Speaking with reporters, he cast the election as an opportunity for Alabama voters to reject the embarrassment that Moore -- who's been ousted twice as state Supreme Court chief justice and has attacked LGBT Americans, Muslims and women -- could bring the state.

"In Alabama we have come so far with too many things, and there is saying: 'Fool me once, shame on you. Fool me twice, shame on me.' Alabama is not going to let that shame happen again," he said.

The stakes are high for Trump -- who has repeatedly endorsed Moore, campaigned in Florida just outside Alabama on Friday night and doesn't want to see the GOP's 52-48 majority trimmed at all.

"The people of Alabama will do the right thing. Doug Jones is Pro-Abortion, weak on Crime, Military and Illegal Immigration, Bad for Gun Owners and Veterans and against the WALL. Jones is a Pelosi/Schumer Puppet. Roy Moore will always vote with us. VOTE ROY MOORE!" Trump tweeted on Tuesday morning.

There's much on the line for McConnell as well. McConnell decided Moore wasn't worth the headache and withdrew support for him -- which means the Senate Republican campaign arm and a super PAC that usually backs its candidates were nowhere to be found in the closing weeks in Alabama.

The exit poll showed that Trump's approval rating among Alabama voters is 47%. He's much more popular than McConnell, who is seen favorably by just 16% of voters.

It all takes place amid a broader national conversation about sexual misconduct. At the center of the Trump-McConnell split over Alabama is that McConnell said the allegations facing Moore are credible, while Trump -- who faces allegations of sexual assault himself -- cast doubt on Moore's accusers.

Alabama's other senator, Republican Richard Shelby, told CNN's Dana Bash on Tuesday that he didn't vote for Moore and it'll be up to GOP leadership to pursue an Ethics Committee investigation if Moore wins. Such a move could be the first step toward Moore's expulsion from the Senate.

"Well, I think that's up to the leadership and the Ethics Committee itself. They always look to anyone's fitness to serve" in the Senate, Shelby said.

Jones' campaign will benefit from high African-American turnout. Black voters made up 30% of the electorate, CNN's exit poll showed -- higher than the 27% they comprised in the 2012 presidential election and above the marks the Jones campaign felt it needed to hit in order to have a chance. Of those black voters, 95% backed Jones, the exit poll showed.

But white voters, who overwhelmingly support Republicans in Alabama, didn't cross over at the rate the Jones campaign had hoped. Just 27% of white voters backed Jones, compared to 70% for Moore.