ALF-CIO: Governor out of touch with Mich. workers 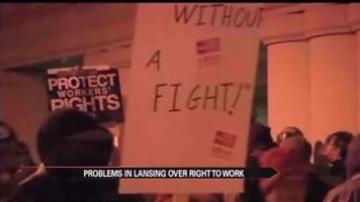 Protesters filled the area outside the capitol building late into the night after the legislation was passed and the bill was signed by the governor.

Union members said that the governor is out of touch with the working men and women of the state.

"He is so out of touch with Michigan's working men and women and the challenges that working families face," said Michigan's AFL-CIO President Karla Swift. "He has lied to us. He hides in the dark of night. He signs this bill and he's tearing the state apart."

The next round in the fight is whether the state government workers are exempt from the law.