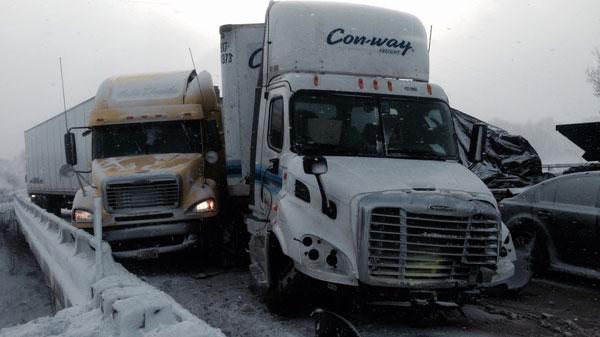 All lanes of the Indiana Toll Road are open.

Just before 9 a.m. Friday, the westbound lanes were closed because of an accident at mile post 68. Indiana State Police said seven semi trucks as well as two passenger cars were involved.

We now know there are injuries, which range from minor to serious.

The initial crash happened after a driver lost control of his rig and hit the median. The other cars were a result of a chain-reaction crash.

Toll Road officials and emergency crews are still working to clear a crash in the eastbound lanes.

At 8:25 a.m., a semi carrying a load of salt jackknifed and spilled its load onto the roadway. In a separate incident, another semi jackknifed and the trailer split in half.

At 3 p.m., Toll Road officials announced they believed they would be able to open the shoulder to allow people stuck in traffic to get through, within the next hour or two.

Crews are beginning a fuel service for drivers stuck in traffic who are low and workers will also be checking on drivers to make sure they are okay.