American deaths in terrorism vs. gun violence in one graph 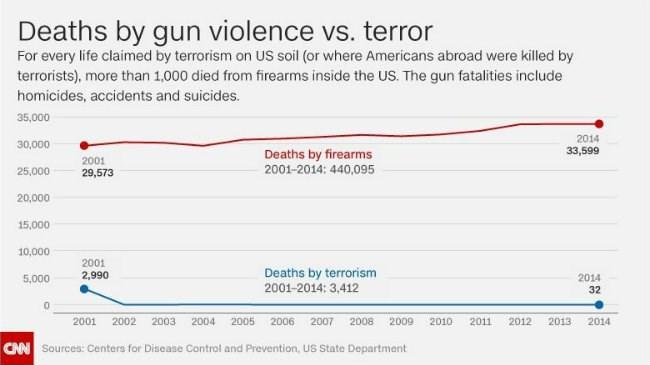 (CNN) -- In his nearly eight years in office, President Obama has formally addressed the nation on the subject of gun violence 25 times: on average, every 112 days.

But in the last year alone, he has made such statements roughly every 36 days.

In October 2015, after a gunman opened fire at Oregon's Umpqua Community College, killing nine people and injuring seven, a visibly upset Obama said the shootings were becoming all too routine.

CNN tallied those numbers last year, and with another year of data available now, we have updated our findings.

For every one American killed by an act of terror in the United States or abroad in 2014, more than 1,049 died because of guns.

Using numbers from the Centers for Disease Control and Prevention, we found that from 2001 to 2014, 440,095 people died by firearms on US soil. (2014 is the most recent year for which the CDC has data for deaths by firearms.) This data covered all manners of death, including homicide, accident and suicide.

According to the US State Department, the number of US citizens killed overseas as a result of incidents of terrorism from 2001 to 2014 was 369.

In addition, we compiled all terrorism incidents inside the United States and found that between 2001 and 2014, there were 3,043 people killed in domestic acts of terrorism.* This brings the total to 3,412.