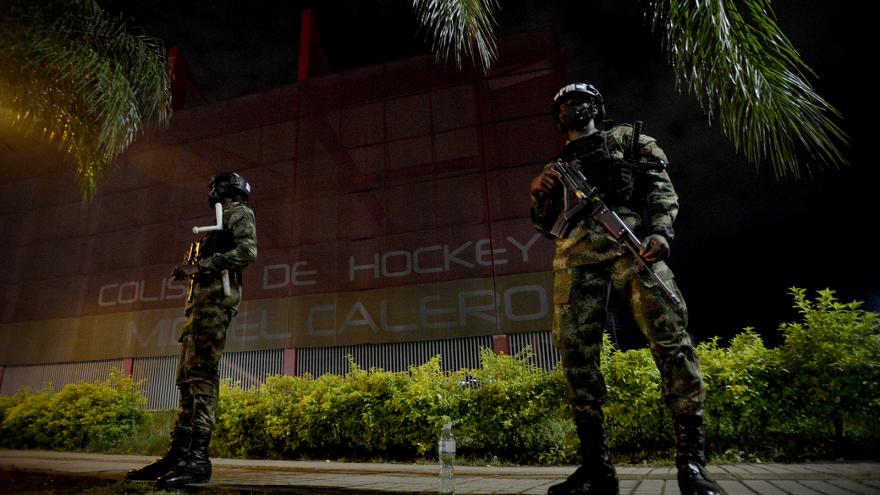 Soldiers on patrol in Cali a day after protests against the government of Colombian President Iván Duque on May 29 in Cali. Photo: Gabriel Aponte/Getty Images
By Stefano Pozzebon

(CNN) -- More than a month since Colombians first took to the streets this year to protest against a botched tax overhaul and the government's handling of the Covid-19 pandemic, tensions across the country are escalating rapidly with more than a dozen deaths over the weekend -- and a risky new government tactic.

On Friday, the southern city of Cali witnessed new scenes of panic when several people in civilian clothing appeared to open fire against protesters, social media footage shows. Colombia's Attorney General Francisco Barbosa later confirmed that one of the shooters was an off-duty employee of his office's investigative unit. Preliminary investigations suggest that the man killed two protesters before the surrounding crowd lynched him, Barbosa said. Footage of the man beaten to death has since gone viral on Colombia social media.

In another episode, a civilian was photographed aiming his gun towards protesters while standing next to uniformed police officers who did not intervene. The man, Andres Escobar, later published a video on social media saying he was shooting non-lethal rubber bullets and asking for forgiveness for his actions. In an interview with local radio station BluRadio, Escobar said he was prompted to action by seeing "vandals" running wild in his neighbourhood, and did not intend to kill anybody.

In Cali alone, at least 13 people were killed over the weekend, according to Colombia's Defense Ministry. In response to escalating violence around the country, President Ivan Duque has deployed the military to thirteen cities to reinforce local police. Defense Minister Diego Molano even posted a video of 500 infantrymen on their way to Cali, set to triumphant music.

Duque said he was pushed to send the military in order to lift dozens of protester roadblocks that since early May have brought the country to a standstill -- but critics and some analysts see the deployment as a risky bet destined to add fuel to the fire.

"Having more security forces on the streets is not a step in the direction of peace," said Sebastian Lanz of Temblores, a Colombian NGO specialized in documenting police violence. His organization has identified over 3400 cases of police abuse in dealing with the protesters, he says.

Lanz says dialogue and peaceful resolution of conflicts should be prioritized as a means of de-escalating the situation while respecting civilians' right to protest. "We ask ourselves, is this deployment of soldiers really intended to pacify the city, or is it to intimidate and limit the rights of the protesters?" he said.

Colombia's government disputes Temblores' figures, but it's hard to deny the heavy-handedness employed by some Colombian security forces. On Monday, Police Inspector General Jorge Luis Ramirez said his office is investigating 170 cases of abuse at the hands of the police. Eleven of those cases are directly linked to the assassination of protesters at the hands of policemen.

"Having the military handle a protest rally is not the best idea," he told CNN. "Even the anti-riot police, with all the issues and incidents they have been involved so far in the protest, at least they are a body of trained professionals specialized in dealing with protesters. A soldier is not trained in conflict resolution: they are trained to kill."

At the same time, Ruiz says the government's decision to add military muscle seemed "inevitable," given the damage the roadblocks cause to a Colombian economy already battered by the Covid-19 pandemic.

Colombia suffers from chronic infrastructure problems and is heavily dependent on road transportation between ports and big cities. One of the most effective tools of the protesters this past month has been to block key highways around Cali and other major urban areas to put pressure on the government by effectively freezing commerce. Over the last month, shortages of fuel and basic goods have been reported in Cali and the surrounding region, and the government says roadblocks are also getting in the way of its Covid-19 vaccination campaign.

The roadblocks are a sensitive point of discussion in ongoing negotiations between the government and Colombia's National Strike Committee, an organization of workers unions and civic associations that is setting the protests' agenda. Protesters see roadblocking as a legitimate tactic, while the government wants to clear the streets as quickly as possible and is promising zero-tolerance for picketers in the way.

The negotiations, still ongoing, have so far failed to provide concrete results and tension continues to grow.

The view from Washington

Throughout its history, the Colombian military has received substantial assistance from the United States, which has financed training and equipment to empower Colombian soldiers in the fight against guerrillas and drug-trafficking organizations. Just last year, the US earmarked $267 million for security assistance to Colombia.

Ruiz, the political scientist, tells CNN that Duque should be careful about how it deploys its troops now. The image of Colombian soldiers involved in repressing the protesters could be hard to stomach not just in Bogota, but also in Washington, where more than 50 US lawmakers last month called for a halt to assistance to the Colombian police until allegations of human rights abuse have been cleared.

According to Amnesty International, weapons provided by the US to Colombian police have already been linked to human rights violations.

"Secretary (of State) Blinken has the power to stop the fear and terror that Colombian protesters are enduring, and he must do so immediately," said Philippe Nassif, the advocacy director at Amnesty International USA, in joining calls for an immediate suspension of weapons-related assistance to the Colombian police.

"We condemn violence and vandalism connected with the protests and reaffirm our support for the right to peaceful protest," a State Department spokesperson told CNN. They added, "We welcome announcements by the Colombian government to investigate allegations of excessive use of force by police."

This weekend, Colombian Vice President and Foreign Minister Marta Lucia Ramirez traveled to Washington to meet with Blinken. While Blinken affirmed close ties between the two countries, he also "reiterated the unquestionable right of citizens to protest peacefully," according to a State Department readout.

In issuing the decree on Friday that authorized military assistance to police facing protesters, Duque stressed it was a temporary decision. Soldiers would be withdrawn as soon as the situation returned to calm, he said.

But Lanz of the NGO Temblores, warns the consequences of this decision could last much longer. "What we're seeing here is that the security forces are reclaiming the territorial control of the public space," he said.

"Because of Covid-19 and the lockdowns, we lost the right to a shared public space where everyone could be free. On one side you have protesters who are reclaiming that space for themselves, but on the other the government is sending the Army to fight for control. It's a territorial fight, and it won't end soon," he added.