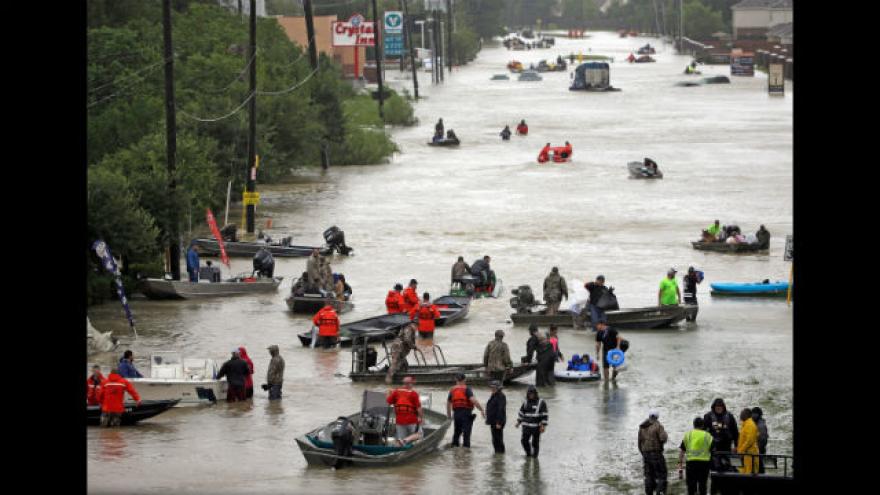 (CNN) -- Exhausted and drenched in filthy floodwater, weary emergency workers and volunteers scrambled to save the latest wave of Tropical Storm Harvey's victims, amid ongoing flash flood warnings and the threat of continuing rainfall.

One of the victims was Sgt. Steve Perez, a veteran Houston police sergeant who drowned on his way to work.

Perez, 60, left for work in the dark about 4 a.m. Sunday and "spent about 2½ hours driving around trying to get to his duty station," police Chief Art Acevedo said. The 34-year police veteran drove on an underpass.

On Monday, officials narrowed the location to one area. The Cajun Navy, a Louisiana-based volunteer rescue force that gained fame in Hurricane Katrina, helped look for Perez, Acevedo said, tearing up.

"Once our dive team got there, it was too treacherous to go under and look for him, Acevedo said. "So, we made a decision to leave officers there waiting until the morning, because as much as we wanted to recover him last night, we could not put more officers at risk."

"For we knew in our hearts it was going to be a recovery mission," Acevedo said.

His body was recovered early Tuesday.

Local officials in Texas have confirmed at least nine Harvey-related deaths. An undetermined number of people are missing, including six family members whose vehicle was swept away in the floods Sunday in northeast Houston.

With another landfall expected, the devastation and misery could intensify.

-- President Donald Trump met with officials in Austin and Corpus Christi. Trump did not visit the hardest-hit parts of Texas because the President wanted "to be very cautious about making sure that any activity doesn't disrupt the recovery efforts that are still ongoing," White House press secretary Sarah Huckabee Sanders said.

-- Several rain gauges southeast of downtown Houston report more than 48 inches of rain from the storm known as Harvey. That marks the most rain ever recorded in the contiguous United States from a tropical storm that made landfall. The previous record was held by Tropical Storm Amelia, which hit Texas in 1978.

-- Officials will not ask for immigration status or documentation from anyone at any shelter, according to tweets in English and Spanish from the city's verified account.

-- Dallas opened a mega shelter at its downtown convention center.

-- Residents within 1.5 miles of the Arkema peroxide plant in Crosby, northeast of Houston, were evacuated as a precaution, the Harris County Fire Marshal Office said. Arkema said the potential for a chemical reaction that can cause a fire or explosion at the site "is real," though it doesn't believe there is imminent danger. The company evacuated a team that has been at the flooded facility since it shut down Friday as Harvey approached.

A sea of volunteers and rescue workers used fishing boats and big SUVs to save Harvey's victims. One volunteer even used a dump truck.

Three days after Hurricane Harvey slammed into Texas, the stubborn, slow-moving storm wreaked more havoc when it caused Houston's Addicks Reservoir to overflow and breached a levee in nearby Brazoria County.

"It was scary -- the water was up to here," Houston resident Yee Seng said, gesturing to the middle of her chest.

The floodwater that topped the reservoir deluged her street and turned it into a river. Seng's boyfriend, Steve Konemany, tried to salvage some of her belongings by floating them on an air mattress.

"We just didn't want to stick around to see what was going to happen," Seng said.

Officials said between at least 9,000 to 10,000 people have been rescued in the Houston region.

Houston police rescued at least 3,000, Acevedo said. The fire department has rescued between 3,000 to 4,000 people, said fire chief Samuel Peña. The US. Coast Guard has rescued more than 3,000 people, according to Lt. Mike Hart.

That number may continue to rise, as countless residents remain trapped in their deluged homes three days later.

"Every passing hour, more boats are getting into the water," Acevedo said earlier. "This is a catastrophic event."

The floodwater breached a levee in the county south of Houston.

"The Brazos River is being pounded, and all of that water is coming down from the tributaries and creeks into the river," she said. "All the roads around us are flooded. We don't have any evacuation routes to tell people to take."

Brazoria County sits between the Gulf of Mexico and Houston, which remains the site of Harvey's most appalling devastation. But Brazoria County's levee breach is not expected to impact the flooding in Houston.

Tropical Storm Harvey hovered over the Gulf of Mexico and threatened to dump an additional 8-12 inches of rain in eastern Texas and western Louisiana through Wednesday night. Houston could see an inch more.

And the water won't stop rising anytime soon. Harvey could bring more "catastrophic and life-threatening" flooding before making landfall again Wednesday morning near the Texas-Louisiana border, according to the CNN Weather Center.

Swollen rivers in east Texas aren't expected to crest until later this week.

Federal officials are already predicting the deadly storm will drive 30,000 people into shelters and spur 450,000 people to seek some sort of disaster assistance.

Stuck in a wheelchair as the water rose

People have turned to the walkie-talkie app Zello to report their dire circumstances. Among them were an elderly couple trapped on a roof and a family caught in the maelstrom with three children, including one in the throes of a seizure and another with autism.

Confined to a wheelchair as the water rose, Karen Preston watched as Harvey's flood took over her home.

Coast Guard rescuers on water scooters plucked her from the flood and to safety -- but without her wheelchair.

She found herself taking shelter at Houston's convention center. Many have no idea whether their homes have been destroyed.

"How do you go from here?" Preston said, choking back tears. "Where do you start? Where?"

Thousands of calls for help have gone out across Houston, and state, local and military rescue units have plucked thousands of stranded residents from the water and deluged homes.

The Pentagon is identifying resources, including trucks, aircraft and troops, that can be dispatched for hurricane relief if the request comes, defense officials said. Gov. Greg Abbott activated the entire Texas National Guard, roughly 12,000 Guardsmen, he said Monday.

In Harris County, home to Houston, authorities asked stranded people to hang sheets or towels from their homes so rescuers could spot them more easily.

The scope of how many people are trapped in flooded homes remains unclear.

Rep. Sheila Jackson Lee said she believes the number of trapped residents across Houston could be "tens of thousands."