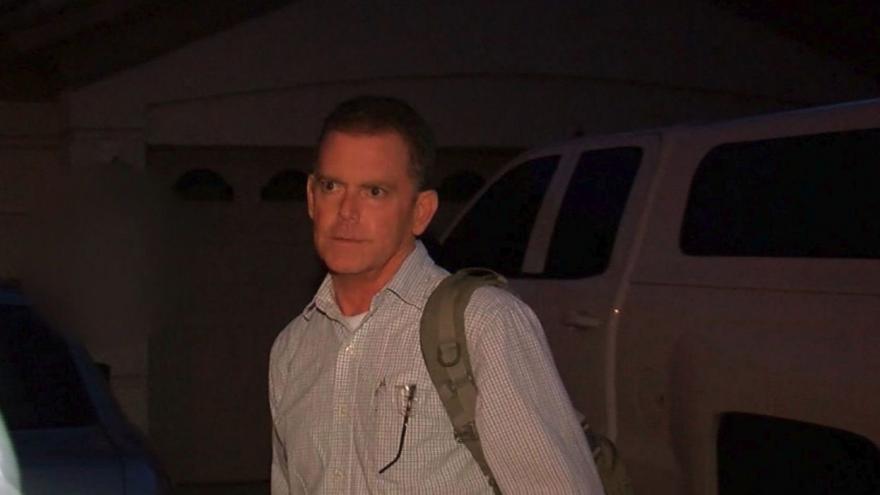 (CNN) -- Douglas Haig, who sold ammunition to the gunman in October's Las Vegas massacre, was arrested Friday on charges of manufacturing and selling armor-piercing bullets in violation of federal law.

A criminal complaint says two unfired .308-caliber rounds found in gunman Stephen Paddock's room had Douglas Haig's fingerprints on them and tool marks from Haig's workshop. The bullets in the cartridges were classified as armor-piercing, the complaint says.

On October 19, the FBI searched Haig's home in Mesa, Arizona, and seized ammunition it says classifies as armor-piercing, the complaint alleges. Haig did not have a license to manufacture armor-piercing ammunition, documents say.

Haig, 55 appeared in court Friday and was released on this own recognizance with specific conditions that were not spelled out in court proceedings. He is due in court again February 15 for a preliminary hearing.

Marc J. Victor, Haig's attorney, told CNN he had no comment. CNN affiliate KNXV caught up with Victor outside the courthouse and the lawyer said he couldn't say anything because of an ongoing case.

"My first obligation and only obligation is to my client," he told KNXV.

Haig has said publicly he sold tracer ammunition to Paddock, but he had no other dealings with him and never saw anything suspicious in their brief interactions.

Haig also said during a Friday morning conference at his attorney's office that he has received death threats after his name was revealed in newly released search warrant records this week.

The maximum penalty for manufacturing illegal ammunition is five years in prison, a $250,000 fine, or both.

Earlier at the news conference at the Phoenix-area office of his attorney, Haig he stressed that his sale made "no contribution" to the killings since Paddock didn't appear to have fired tracer rounds, which produce a flame that lets a shooter follow the bullet's path for precise aim.

"I hope today ends (the threats), when people realize that I wasn't in collusion with Paddock -- that I was not in any way, shape or form associated with the horrible crime that he committed," Haig said.

Police say Paddock opened fire from his room at Las Vegas' Mandalay Bay hotel onto a crowd attending a music festival below on October 1, killing 58 people and shooting and injuring 422 others. More than 850 others suffered other injuries in the attack.

Haig, an aerospace engineer and part-time ammunition reseller, said he sold 720 rounds of surplus US military tracer ammunition to Paddock at Haig's home in September after Paddock approached him at a Phoenix gun show.

"At no time did I see anything suspicious or odd or any kind of a tell, anything that would set off an alarm." he said.

Haig's connection to the investigation came to light this week when hundreds of pages of search warrant records were released to the news media.

Authorities have repeatedly said Paddock, who investigators say died of an apparent self-inflicted gunshot wound, was the only shooter. Neither Haig nor anyone else has been charged in the case.

Victor said police found his client's name and address on a box that Paddock had -- a box that Haig gave him to carry the tracer rounds he'd bought.

Haig said he learned of the massacre when authorities contacted him at work the next morning.

"Revulsion," Haig said of his reaction. "Sickness. Horror that this man would do something like that."

Haig spoke with investigators four times after the shooting, and has been "fully cooperative," Victor said.

"This was a routine transaction to purchase a routine type of ammunition that is available in many different retail outlets throughout the state of Arizona," Victor said. "After that transaction, Doug had absolutely no further contact with Mr. Paddock."

But there was no evidence the tracer rounds were used during the attack, according to the sources, who requested anonymity because they were not authorized to speak publicly about such details.

Timeline of the sale

A Nevada judge on Tuesday unsealed police search warrant records -- prepared shortly after the shooting -- that mentioned two persons of interest in the case. The judge released the documents after CNN and other media outlets sued to obtain them.

One person of interest, whom police had named previously, was the killer's girlfriend, Marilou Danley. Authorities subsequently cleared her publicly.

The second name was redacted. But the Las Vegas Review-Journal reported it had a version of the search warrant that named, without redaction, Haig as that second person. The documents didn't explain why he was a person of interest.

Haig held Friday's news conference to protect his reputation, he and his attorney said. They gave the following timeline:

• Paddock first approached Haig's table at a Las Vegas gun show sometime last year but met someone else besides the seller behind the table.

• Haig first met Paddock at a subsequent Phoenix gun show, where he was selling ammunition.

• Paddock took Haig's business card because the seller didn't have the quantity of trace ammunition that he wanted.

• In September, Paddock arrived at Haig's home, bought the tracer ammunition and drove away.

"One woman (was) screaming through my door that I should be killed and I should die," he said. "It's been not a lot of fun, quite frankly."

"I had no contribution to what Paddock did," Haig added. "I had no way to see into his mind."

Sheriff has said feds are investigating someone

When the search warrant documents were released this week, Clark County District Court Judge Elissa Cadish allowed a small portion of those records to be redacted because "there is an ongoing investigation regarding charges against another individual, arising out of information obtained in connection with the ... shooting, but not directly related to the shooting."

In response to a question from CNN in January, the Clark County sheriff, Joe Lombardo, said federal authorities are investigating a person in the case. That person could face federal charges not directly related to the shooting within the next 60 days, the sheriff said January 19.

On Friday, a reporter asked Haig whether he believed he was that person.

In a move separate from Tuesday, a judge on January 12 released hundreds of pages of federal court documents related to the case, revealing the inner workings of the early stages of the investigation.