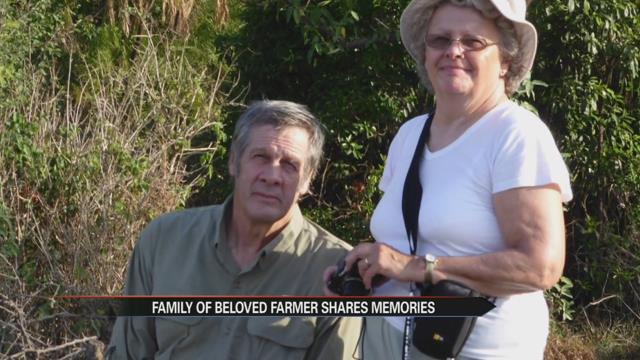 On Tuesday autopsy results revealed that 64-year old David Blough died of blunt force injuries while working on his farm. According to the coroner Blough’s death is considered accident.

“We are humbled by the support we have received from our carrying community. Take time to tell people you love them,” says Michelle Blough, David Blough’s wife.

After unexpectedly losing her husband of 42 years, Michelle tears up while remembering his legacy.

“He was driven and goal oriented and yea he worked a lot,” says Michelle.

The 64 -year old died in a farming accident Monday afternoon while operating a skid-steer loader at one of his farms off Country Road 21 in Bristol.

“It’s an unforgiving piece of equipment. It has hydraulic lift power of six thousand pounds, down pressure probably there equivalent thereof,” says Mike Berby a Dairy Farmer from LaPorte.

Berby knew David for 40 years and says even the most experienced farmer faces danger on the job.

Michelle says her husband of 42 years was very knowledgeable in his profession.

“He was generous and very, very smart knew a lot about cows and the dairy industry,” says Michelle.

David shared that knowledge with his involvement in 4-H.

He was a quiz bowl coach for the state dairy quiz bowl team and gained attention across the country.

“He was passionately involved in the dairy particularly in the 4H and the showing he was actually nationally recognized. He was on the hosting list for the national judges,” says Bob Zell, President of the 2016 Elkhart County 4H County Fair.

“Yea he will be missed for sure at the fair, it’s a tragic loss,” says Zell.

Just as involved as David was in the community he was the leader of his household. His wife Michelle, daughter Emilie, and son Craig, will now have to make plans for the farms.

“It’s just the mountain ahead of us is looking pretty tall,” says Michelle Blough.

This is not the first hardship the family faces. In 2004 David’s mother died in a car accident on her way to the Elkhart 4H County Fair. That same year the Blough’s lost their son in a farming accident.