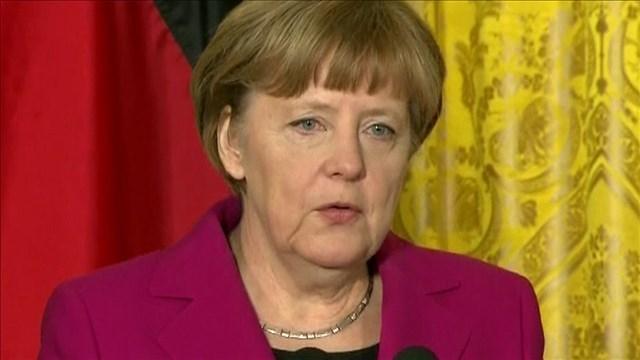 (CNN) -- German chancellor Angela Merkel has called for a ban on full-face veils in the country, during a speech at her party's conference on Tuesday.

"The full veil is not appropriate here, it should be forbidden wherever that is legally possible. It does not belong to us," she said at the Christian Democratic Union (CDU) gathering.

Her comments were met with applause by the audience.

It's not the first time party leaders have proposed banning the Islamic dress, with Interior Minister Thomas de Maiziere also calling for the veil to barred from public places in August.

"It does not fit into our society for us, for our communication, for our cohesion in the society.... This is why we demand you show your face," he said at the time.

A fourth term for Merkel?

Merkel's comments come weeks after she announced she would be seeking a fourth term in next year's elections.

The 62-year-old chancellor said she expected the 2017 campaign to be her toughest to date.

Merkel has angered many voters with her decision to open Germany's borders to migrants, mostly from war zones in the Middle East.

In September, her party suffered a significant defeat in local elections.

Another stint for Merkel would also be significant because a large part of the German electorate is looking for stability in uncertain times after the Brexit vote in Britain, the election of Donald Trump in the United States and the rise of populist movements in several European countries.

Cannes, a city on the French Riviera famous for its annual film festival, temporarily banned religious swimwear -- including burkinis -- in the wake of recent terror attacks in the country.

In April 2011, France also became the first European country to ban wearing the burqa, a full-body covering that includes mesh over the face, and the niqab, a full-face veil with an opening for the eyes, in public.

Those breaking the law face fines of 150 euros (about $205) or public service duties.

The law was upheld by the European Convention on Human Rights in 2014 after a 24-year-old woman brought the case to court, claiming it infringed on her religious freedom.

The laws have been criticized by religious freedom advocates but supported by others who see the Islamic veil as demeaning to women and inconsistent with France's rigorously enforced secularism.