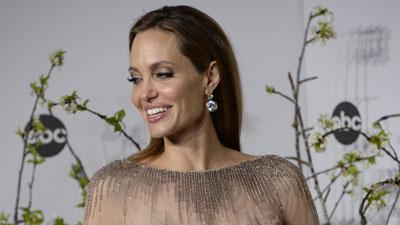 (CNN) -- Two years after she underwent a double mastectomy to cut her cancer risk, actress and U.N. envoy Angelina Jolie has had surgery to remove her ovaries and fallopian tubes for the same reason, she wrote in The New York Times on Tuesday.

Jolie, 39, carries a mutation of the BRCA1 gene, which sharply increases her risk of developing breast cancer and ovarian cancer. Her mother was diagnosed with the latter at age 49 and died seven years later.

In her New York Times op-ed Tuesday, Jolie said she had been planning the latest preventive surgery for some time.

But a blood test that revealed worrying markers accelerated the process, the Hollywood star said. Her doctor told her he wanted her to see a surgeon immediately to check her ovaries.

"I went through what I imagine thousands of other women have felt," she wrote. "I told myself to stay calm, to be strong, and that I had no reason to think I wouldn't live to see my children grow up and to meet my grandchildren."

Her husband, Oscar-winning actor Brad Pitt, was on a plane back from France within hours, she wrote.

"The beautiful thing about such moments in life is that there is so much clarity. You know what you live for and what matters. It is polarizing, and it is peaceful," she wrote.

Further tests came back negative for tumors, Jolie wrote. "There was still a chance of early stage cancer, but that was minor compared with a full-blown tumor. To my relief, I still had the option of removing my ovaries and fallopian tubes and I chose to do it."

Jolie stresses that not all women with the same BRCA1 gene mutation should feel they must automatically leap to surgery, but she urges them to explore their options and take control.

Her family history -- she lost her grandmother and aunt to cancer, as well as her mother -- combined with the gene mutation meant that in her case, the removal of her ovaries and fallopian tubes seemed the best course.

While not as complex as the mastectomy surgery, its effects are more severe, Jolie said, since it puts a woman into forced menopause. She must now take estrogen and progesterone in order to keep a hormonal balance.

She will not be able to have more children and foresees physical changes, she said. But Jolie acknowledged she was lucky because she already has a family, unlike some women who face this difficult decision.

"It is not possible to remove all risk, and the fact is I remain prone to cancer," she said. "I will look for natural ways to strengthen my immune system. I feel feminine, and grounded in the choices I am making for myself and my family. I know my children will never have to say, 'Mom died of ovarian cancer.'"

The actress has been in a relationship with Pitt since the mid-2000s. They have three biological and three adopted children.

She wrote two years ago that her preventive double mastectomy had cut her risk of developing breast cancer from 87% to 5%.

Jolie serves as a special envoy for the United Nations High Commissioner for Refugees and has visited refugee camps around the world. She is also a vocal global campaigner on the issue of sexual violence against women.