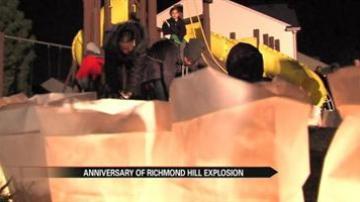 Monday, a luminary walk was held to mark the anniversary of the deadly Richmond Hill explosion near Indianapolis.

Two people were killed and dozens more injured in that neighborhood explosion in November 2012.

"We are a community that does not give up. We persevere through anything. This is family, this is home," said Richmond Hill resident Nikki Cocherell.

The town is still re-building from that major explosion that leveled numerous homes.

Three people were accused of arson and murder. They will be back in court December 4th.