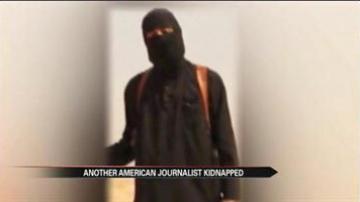 WASHINGTON D.C. -- A desperate mom is pleading to the terrorist group ISIS.

While she is begging them to release her kidnapped son, another mother gets to welcome her child home.

ABC news obtained a video of the anguished mother of journalist Steven Sotloff, and the video is being aired on an Arabic language news channel.

Shirley Sotloff speaks directly to the leader of the militant group saying, "I want you to use your authority to spare his life. I plead with you to grant me this."

The 31-year-old Sotloff was last seen alive at the end of the disturbing video which showed the beheading of American journalist James Foley last week.

The ISIS militant in that video spoke directly to President Obama, calling on him to end American airstrikes against ISIS targets in Iraq.

“This administration is deeply engaged and doing everything we can to seek the return of every American who is currently being held in that region.”

While one family anxiously waits, another is celebrating a homecoming.

After being held captive by militants in Syria for two years, American journalist Peter Theo Curtis is back home in Cambridge, Massachusetts.

“I now remember how good the American people are,” says Curtis.

But for a third family today, grief. for those who knew Douglas McArthur McCain, an American who joined ISIS and died fighting with the Jihadists earlier this week...a sense of disbelief.

He liked Pizza Hut and the Chicago Bulls.

He was but one of an estimated 100 Americans who are fighting for groups in Syria, including
ISIS

The White House repeated today that the U.S. will not pay a ransom for hostages, but officials said they will exhaust every other option.
Share this article: