Anti-Trump protests spread across the nation, including in Michiana 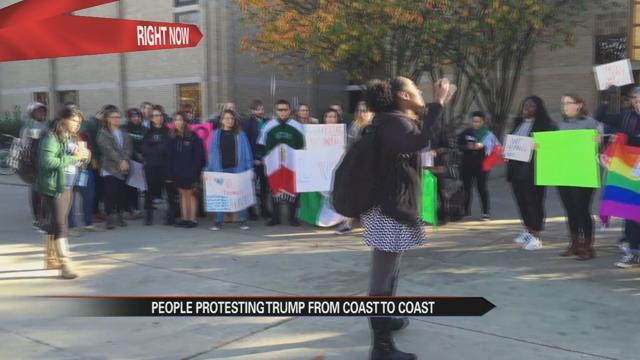 Outrage and heartache across the nation on Wednesday night.

Anti-Trump protests in at least seven major cities, including some in the middle of highways and major roads.

Many of the protesters, barely old enough to vote, took to social media with the hash tag ‘not my president’, to voice their disbelief.

In downtown Chicago, protesters with signs, disrupting traffic, right in the midst of rush-hour.

In New York, Seattle, Atlanta and in Michiana, the youth were calling for acceptance, peace and equality.

Students at the University of Notre Dame turned protest in to prayer on Wednesday night.

"Even though the election is over, the fight is not over for human dignity and human rights and respect for all people," said one student.

ABC 57 cameras were not allowed on campus for the peaceful service, but a protest organizer told us their voices need to be heard.

"We wanted to spread love and tell everyone that we care about all of these people that Trump attacked," said the student.

Across the nation, the man who promises to ‘Make America Great Again’, is getting greeted with anger and alienation from those who haven't even accepted him as the leader of the free world.