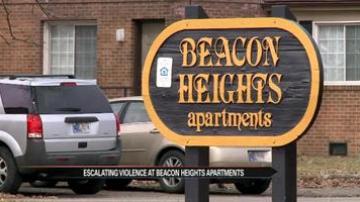 SOUTH BEND, Ind. -- Residents of the Beacon Heights Apartments on Lincolnway West say they are fed up with fights, break ins and hearing gunshots. They turned to ABC57 News for help.

In an example of the problems, the manager says three days ago a young boy shot another boy with a BB gun. The mothers of the two boys got into a fight and one of the mothers was arrested.

Rose Mason says she wants something to be done at Beacon Heights Apartments.

She says the recent fights and shootings have gotten out of hand.

"We shouldn't be harassed because we live in low income apartments, you know? We should be treated like human beings," said Mason. "Regardless of where I live at you can look at my house. I have a nice house. I keep it clean."

Residents say the security officers aren't doing enough, but the complex's owner says the same 2 South Bend officers, while they are off duty, have patrolled the area for years.

One neighbor, who didn't want to go on camera for fear of being kicked out, said there's a curfew.

The complex manager confirmed neighbors must be inside by 10 p.m. and said that's a rule listed on each lease.

She believes late night loitering creates problems and, for that reason, the complex got rid of any common areas.

Even with that rule, many residents say they still don't feel safe.

"I will not let my wife walk around here by myself," said Richard Pauwels, whose wife is pregnant.

Pauwels says he worries about the little kids who walk to the two nearby schools.

He hopes the conditions improve or he'll be looking to live elsewhere.

"It's very unsanitary. It's just an old place. It just needs to be torn down. It's beyond repair and they need to make a new one or something," said Pauwels.

The complex's manager says they're trying to make things better, but there's only so much they can do and they can't be everywhere at all times.