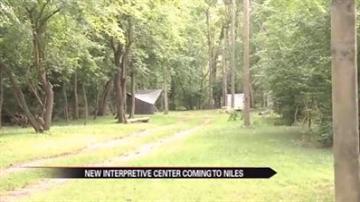 NILES, Mi.-- Fort St. Joseph has rotted away since its glory days as a trading post for American soldiers and Native American Indian tribes. The Fort St. Joseph Archaeological Advisory Committee wants to bring back what's left of it to educate locals and potential visitors from all across the country.

“We’ve been working with Western Michigan University, who’s been doing an archaeological dig and promoting and helping them and it seems like a very natural development to then continue this on a permanent level with an interpretive center,” Fort St. Joseph Archaeological Advisory Committee Chairman Barbara Cook said.

The 3,000 square-foot building would cost the committee $300,000 and the group plans to raise the money themselves with the help of professional fundraisers.

“We also want to raise close to $1 million as an endowment," Cook said.

It's a task Cook said is possible with the help of local donors who want to invest in their community.

“They do believe it’s a doable project,” Cook said.

The center would feature a gift shop, lecture hall, large display areas for artifacts and work areas for researchers. Cook said the group's main goal is to educate.

“The facility would be large enough so that we could sponsor educational programs, we could have schoolchildren coming in,” Cook said.

She said she hopes she and her collegues can share what they say is a long-lost gem of Niles through the center.

“Fort St. Joe is a part of the heritage of Niles,” Cook said.

Cook said the committee also hopes to extend the invitation to the thousands of people who come to the area for Notre Dame football games and who want to get a taste of the rich history Michiana has to offer.