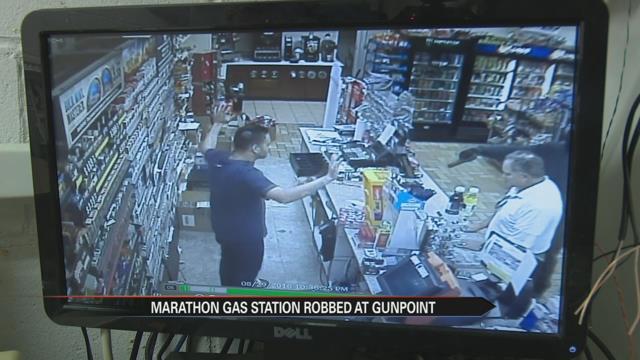 It was a quiet night inside the Marathon gas station convenience store on Spruce Street when things quickly turned chaotic.

A masked man entered the store with a gun drawn around 10:40 p.m., shocking the cashier and lone customer inside.

The footage shows the cashier quickly emptying wads of cash from the register into a paper bag.

You also see the gunman struggling to grab the wallet out of the customer’s back pocket – the suspect soon has the customer take it out himself and slide it across the counter.

The suspect then demands cigarettes; even having the cashier place a few cartons in a bag for him.

He goes to leave, but steps back into frame for one last look at the register, wanting to make sure he got all the cash inside.

Seconds later, the gunman is gone; leaving the two victims stunned, but safe.

The gas station was back open Tuesday, but the armed suspect – who the cashier said was a black man, about 6 feet tall and roughly 200 pounds – is still on the loose.

Dowagiac Police Chief Steve Grinnewald said an investigation is underway, and he is upping patrols in the area.

“There’s not too many places at that time of night that are open [in Dowagiac],” Grinnewald said. “So we try to make sure that we stay in those areas, stay by those, stay visible, so that people can see us.”

He added, “[We] make sure we keep an eye on things; make sure we’re looking inside the stores; make sure, not only, we see them, but they see us.”

The gas station cashier was too afraid to speak on camera, but he said the suspect made off with nearly $1,000 in cash, along with that customer’s wallet.