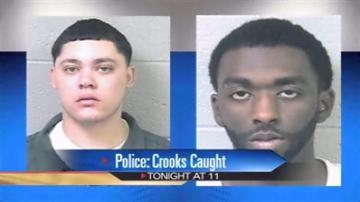 Police arrested Derek Bishop, 23, and Anthony White, 21, of South Bend, in connection with an armed robbery at a Berrien Springs BP gas station Tuesday and a burglary at a Niles gun shop Saturday.

Police say the pair are suspects in several other break-ins and robberies all across Michiana, including Cass County, Berrien County, and the City of South Bend.

"This is a mom and pop business, nothing big if you will, but we rely on it for our income," said Farr.

That is why Farr was upset to learn that early Saturday morning someone broke into the shop and made off with $6,000 worth of handguns.

"I feel violated," said Farr. "That’s what it feels like to me."

But Thursday, he got good news.

Police arrested Derek Bishop and Anthony White. The men suspected of being behind the Saturday's break-in.

The pair were pulled over for a traffic violation and that is when police discovered a gun matching the description of the firearm used in an armed robbery Tuesday at a BP gas station in Berrien Springs.

Once in custody, police learned both Bishop and White had already been identified as suspects in the Niles gun shop burglary.

"I was very happy, very happy. Being a police officer, it was the ultimate goal in happiness – being able to arrest the bad guy," said Farr.

Now, he just hopes police will be able to recover all the guns stolen from his store. In the meantime, Farr plans to beef up security at his shop by putting steel bars over the glass door that was smashed in during the burglary.

Thursday, in court, both Bishop and White pleaded not guilty to the seven felony charges each faces. In total, bond was set at $255,000 each.