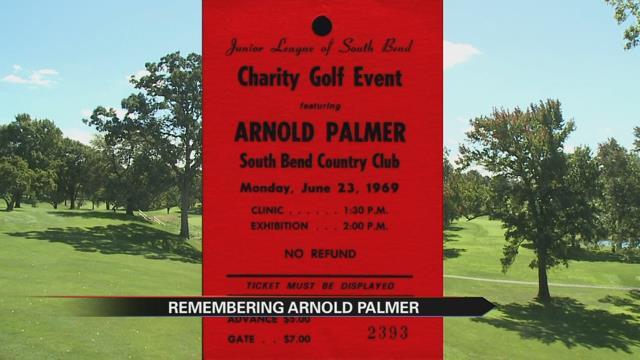 As funeral arrangements are underway for golfing legend Arnold Palmer. South Bend golfers are remembering him and one says he left quite the impression here because it’s part of the South Bend Country Club’s legacy.

Sponsored by the Junior League here in June of 1969, Palmer was joined by  a Notre Dame legend, and a famous singer.

“Perry Como and Arnold Palmer agreed to give a demonstration and they played a match, an 18 hole match against Ara Parseghian the Norte Dame coach at that time," said Bob O'Connor a member a current historian of the club.

Walking down the fairway on the 18th over a thousand people surrounding him, Palmer looked to the crowd and thanked them for coming out.Then treated them all to an eagle on that final hole.

“So that was his last shot here at South Bend Country Club in 1969,” O'Connor said.

He wasn't there on that day, but imagines the crowd was excited and witnessed the best day in golf history.

And as the club celebrates 100 years this day is one of the most memorable.

“I think Arnold was probably the last of the great golfers that played here,” O'Connor said.

Palmer died from a heart condition at 87 years old.