As Trump sputters, Clinton's campaign prepares for an even nastier race 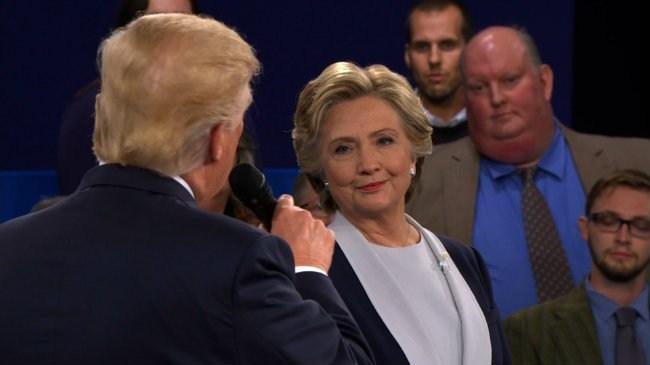 (CNN) -- Hillary Clinton and her top aides couldn't be happier that Donald Trump's campaign is imploding around him.

But the last week has also made one thing clear for top Democrats: The more wounded the GOP nominee gets, the nastier he will grow toward Clinton. And the campaign is already preparing its defenses for the third debate later this month.

Clinton aides were shocked -- and caught off guard -- when Trump held a press conference with three women who had previously accused Bill Clinton of sexual impropriety before Sunday's debate. They were even more surprised when those women took seats inside the hall, in front of some of the most prominent Democrats in the country.

Even though aides said that Trump's decision to invite three women "failed" to intimidate Clinton, there is now an acknowledgment inside Clinton's campaign that if the wheels completely come off Trump's campaign, the attacks could grow even more personal.

"This was supposed to be his big moment. His threat, he followed through and it had no effect, so I don't know what he is going to do as an encore," Jennifer Palmieri, Clinton's communications director, told reporters on Monday.

But Palmieri also acknowledged that this won't be his last attempt to dredge up past scandals and allegations to humiliate the former secretary of state.

"She's been through a number of trials over the course of her career and she's certainly not going to let him throw her off or intimidate her from speaking out," Palmieri added.

Clinton also nodded to the astonishing spectacle of Sunday's debate.

"Did anybody see that debate last night," Clinton asked to big applause at Wayne State University in Detroit. "Bet you never saw anything like that before."

Less than 24 hours after the debate, Clinton and her team have already started to prepare for the third and final contest in Las Vegas later this month.

One line of attack that Trump has effectively leveled against Clinton is questioning what she has accomplished in her 30-year career, arguing that she has plans but should have been able to do more as US senator and secretary of state.

On Monday in Columbus, Ohio, Clinton presented her achievements by decade and compared those moments with points in Trump's life.

"So when Donald Trump talks about what I have been doing for the last 30 years, I welcome that," Clinton said at her largest rally of her presidential campaign. "Because in the 1970s, I was working to end discrimination and he as being sued by the Justice Department for racial discrimination."

"In the 1980s," Clinton added, "I was working to improve the schools in Arkansas ... while he was getting a loan for $14 million from his father to start a business."

After slamming Trump for his NBC show "The Apprentice" -- "on the day that I was in the situation room watching the raid the brought Osama bin Laden to justice, he was hosting Celebrity Apprentice" -- Clinton said: "If he wants to talk about what we have been doing the last 30 years, bring it on."

Even as they gird for a nasty last debate of the campaign, Clinton's aides are openly giddy about the fact that Republicans are openly feuding. After boarding the flight, Clinton remarked that it was time to take off so alcoholic beverages could be served.

The Clinton campaign watched on Monday as House Speaker Paul Ryan informed GOP House members on a conference call that he was no longer able to defend Trump --- a stunning announcement that sparked chaos inside a party that had already been fractured around Trump's controversial candidacy this year.

"I think it's pretty stunning that the morning after the debate, the speaker of the House has to come out and say that he's no longer going to defend Donald Trump and that each Republican member of Congress has to decide for themselves whether or not they're going to support their party's nominee," Palmieri said.

After Ryan informed House Republicans that he could no longer defend Trump, the GOP nominee was quick to express his anger on Twitter.

"Paul Ryan should spend more time on balancing the budget, jobs and illegal immigration and not waste his time on fighting Republican nominee," Trump wrote.

Ever since a 2005 video in which Trump casually brags about sexual assault was made public last week, Republicans across the country have begun to pull their support for Trump. Ryan and other congressional leaders have not gone as far as to rescind their endorsement, but plenty of Republicans in tough Senate and House races have rescinded their endorsements.

Clinton was in good spirits after Sunday night's debate, where her campaign aides felt that she effectively dispatched with Trump's attacks and tried to stay focused on speaking to the undecided voters who asked questions during the town hall contest.

Clinton received some good news Monday in a new NBC/Wall Street Journal poll that was conducted after the lewd 2005 video was made public -- but before Sunday's debate -- that found Clinton with a 14-point lead nationally in a head-to-head matchup against Trump, 52% to 38%. In a four-way race including third-party candidates Gary Johnson and Jill Stein, Clinton leads 46% to 35%.

But even Clinton knew after the debate that her race against Trump, something she cast on Monday in Detroit as a fight between cynicism and hopefulness, was far from over.

Asked on Sunday night whether she was surprised to see her husband's accusers in the audience, Clinton shook her head.

"Nothing surprises me about him, really," she said. "I was surprised by the absolute avalanche of falsehoods I find it almost unimaginable that someone can stand and just tell a falsehood after a falsehood."