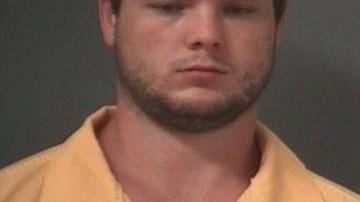 Bunker Hill, IN - An elderly man was stabbed while walking on Nickel Plate Trail Sunday afternoon.

When emergency crews arrived, they found Arthur Anderson, 76, of Kokomo on the ground bleeding profusely from his neck.

Despite the efforts of medical personnel and citizens on the trail, Anderson died from his injury.

Witnesses say they saw a man walk up behind Anderson, and unprovoked, allegedly stabbed Anderson in the neck.

They say that he then took off running and drove off in a black Jeep Cherokee.

When the trooper tried to stop the jeep the driver, later identified as Shane Golitko, 22, of Bunker Hill refused to stop and continued to drive eastbound on S.R. 218.

Golitko led officers on a eight-minute pursuit, reaching a top speed of 50 mph.

The chase came to an end when cops blocked the road with their cars.

It was later discovered that a minute before the 911 call reporting the stabbing, that Valerie Henson, 48, of Bunker Hill, called 911 to report her son Golitko had battered her during a fight at their home.

She ran to a neighbor's house when her son grabbed a knife from the home and walked the 150 yards to Nickel Plate Trail and allegedly stabbed Anderson.

Golitko then returned to his house and destroyed items inside the home.

Officers said that he also stabbed two dogs, killing one of them.

According to his mom, he then took off in his mom's jeep.

Henson suffered a broken arm during the battery, she was treated and released from Duke's Memorial Hospital.

Anderson, another adult and two boys were on the trail as part of a Boy Scout outing.

They had planned to hike the trail from Bunker Hill to Bennetts Switch, about five miles.

The group had stopped on the trail to talk about the identity of a tree when the stabbing occurred.

Anderson was the only one attacked, he had been involved in scouting for over 50 years.

Golitko was arrested on a murder charged and is housed at the Miami County Jail.

He also faces two felony charges for battery, one being battery by bodily waste.  He allegedly spat at police officers while being processed into the jail.

He has no bond.