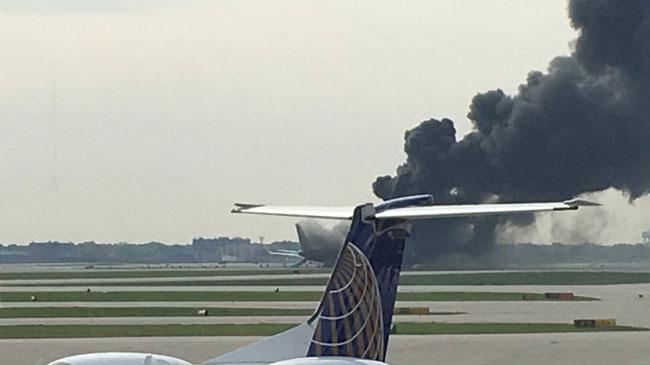 (CNN) -- The right-side engine of an American Airlines Boeing 767 failed Friday during an attempted takeoff, sending debris as far as a half mile and passengers hurriedly down emergency slides onto a runway at Chicago's O'Hare International Airport.

The 161 terrified passengers and nine crew members scrambled to safety Friday afternoon after huge flames erupted on the right side of the plane.

Airport fire Chief Timothy Sampey said crews responded to a report of a No. 2 engine on fire. The plane, which had stopped well before the end of the runway, had about 43,000 pounds of fuel.

"This could have been absolutely devastating if it happened later," he said.

About 20 people were taken to the hospital with minor injuries that occurred during the evacuation down the emergency slides, District Chief Juan Hernandez said. There were people with minor bruising or injured ankles, he said. None of the injuries were caused by the fire.

American Airlines spokeswoman Leslie Scott said Flight 383 was bound for Miami when it aborted takeoff due to an engine-related issue.

The rare, but extremely serious, engine failure sent debris from the engine spewing across the south side of the expansive airfield. Part of the engine's fan disc were found a half mile away on a building used by UPS, two sources said.

A passenger who was sitting in the middle of row 31 said he heard a loud clunk, then saw a large ball of flame that he assumed came from the engine area. Gary Schiavone of DeMotte, Indiana, said the captain was able to stop the aircraft quickly, and then it was "coordinated chaos."

There wasn't much yelling or screaming, he told reporters, except passengers who shouted at others who were trying to grab their bags from the overhead bins. Schiavone said about 30 seconds into the evacuation, smoke started to pour into the cabin. The difficulty in breathing was the scariest part, he said.

Asked whether he was afraid he was going to die, Schiavone said, "Of course. I'm thinking the plane is going to blow up."

Schiavone complimented the crew for getting everyone out in what he estimated was about a minute.

Video tweeted by a witness on the ground showed an airliner with a large tower of smoke rising from the right side and flames billowing beneath the fuselage. The video showed passengers coming down two of the emergency slides on the 767's left side. A dog also evacuated, officials said.

Josiah Ryan, senior producer for Social TV at CNN, was aboard a flight landing at O'Hare. Shortly after their American Airlines flight landed, their captain told passengers over the loudspeaker, "We're near our gate, but there has been an accident on one of the runways."

Ryan said he saw emergency vehicles rush to the runway.

Four of the airport's runways were closed still late afternoon Friday, but that was not affecting airport operations, said Ginger Evans, the commissioner of the Chicago Department of Aviation.

A helicopter for CNN affiliate WGN shot video of the plane sitting in the middle of a runway with a darkened right wing. More than a dozen emergency vehicles surrounded the jet for hours.

The National Transportation Safety Board will investigate.

Other Boeing jets have been involved in runway incidents in the past 13 months.

A Boeing 777 taxiing for takeoff at Las Vegas International Airport in September 2015 aborted its takeoff roll to London when one of its two engines failed. The following month, passengers aboard a Dynamic Airways 767-200 were forced to evacuate because of a fuel leak that caused a fire while the aircraft was taxiing in Fort Lauderdale. Both incidents are still under investigation by the NTSB.

CNN's Chuck Johnston and Braden Walker contributed to this report.