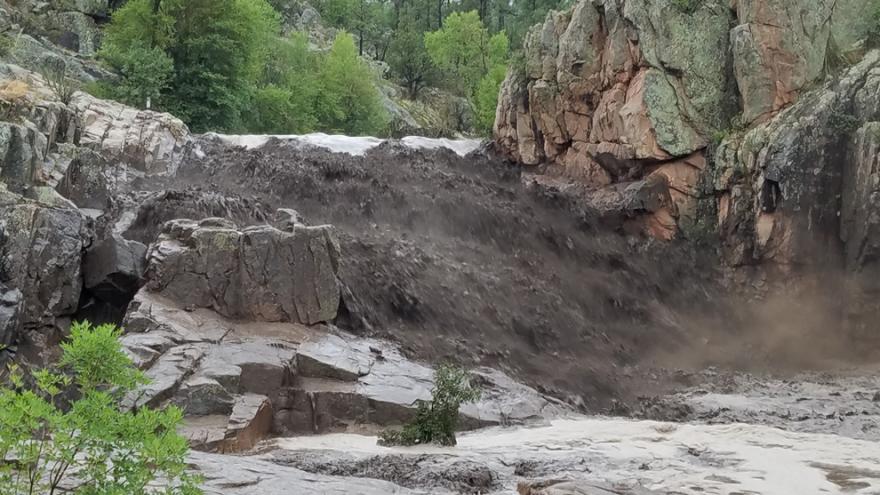 (CNN) -- North of Phoenix, which was baking in the desert heat, a family gathered at a popular swimming area to cool off and celebrate a birthday.

Heavy rain was falling eight miles upstream from where they played, but it was apparently clear where they were. Even if they had heard or seen the flash-flood warning on their smart phones, it's hard to imagine they could have anticipated the devastation about to hit them from nowhere Saturday afternoon.

Summer fires had cleared ridges and slopes of vegetation, so there was nothing to slow the tremendous volume of water that swept down on them so quickly, on land baked to repel water by constant high temperatures.

"They had no warning. They heard a roar and it was on top of them," Water Wheel Fire and Medical District Fire Chief Ron Sattelmaier told the Arizona Republic.

Reportedly up to 6 feet high and 40 feet wide, the waters swept away 14 members of the family, carrying them fast and far downstream.

Nine were killed, including six children ages 2 to 13, police said.

The Gila County Sheriff's Office on Monday identified the nine victims as:

Another family member was still missing Monday morning, when four more were released from a hospital, according to CNN affiliate KNXV in Phoenix.

The disaster happened near the Cold Springs swimming hole, just north of Payson, in Gila County, and about 90 miles north of Phoenix.

Flooding left behind path of destruction

KNXV tweeted a photo showing the grim aftermath, which left behind an avalanche of mud and rock that flowed into the swimming hole. The station also posted raw video of a helicopter rescue operation in the area showing muddy water cascading over rocks.

Cold Springs is one of several popular swimming spots in Tonto National Forest. It is just upstream on Ellison Creek from Water Wheel, a larger area. The stretch of river is known for canyons and water channels. A website about Arizona swimming holes said "the water is so cold it takes your breath away for a few seconds."

But it's difficult to know what's happening upstream.

Rain can fall miles away and sweep down creeks so fast and strong it's hard to outrun or outswim them. The National Weather Service in Phoenix said burn areas, desert washes, low-water crossings and low-lying areas are susceptible to such flooding.

KNXV said dozens of people were swimming in the river when the flooding occurred and quoted Sattelmaier as saying there was no way of knowing how many people were actually present.

Gov. Doug Ducey said on Twitter that the state would assist in all ways possible.

"Deepest prayers for those lost in the Gila County tragedy, for their families and the entire community," Ducey tweeted.

Trent Shue is a volunteer with the Tonto Recreation Alliance. He and other members were out marking trails close to Ellison Creek, about three miles from the watering hole, when the storm hit.

"In a short period of time, the creek along the side of the road started to get exceptionally heavy," Shue said. "We could hear the roaring of the flash flood in the distance, and it was something to behold. We made sure to stay far ahead of the rushing water, and finally found a safe spot where we could wait it out."

A video recorded by Shue shows a strong stream of water carrying heavy logs and wiping out trees in its path.

The National Weather Service has issued a flash flood watch for much of Arizona, including the greater Phoenix area, through Monday evening. Storms are expected into the middle of the week.

ABC 15 tweeted a viewer's photo in the Sun City area, which showed several cars moving through a flooded street.