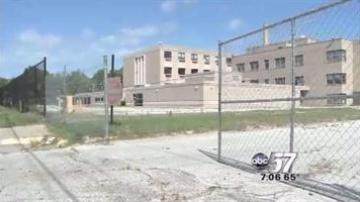 BENTON HARBOR, Mich. – Behind an open fence and broken windows in the heart of the city sits a chapter in Benton Harbor’s history book.

“My sister was born there,” said 57-year-old James Hall. He remembers when Mercy Hospital was one of the best in the area. Now it’s one of the worst things to look at in his neighborhood.

The latest attempt to tear down hospital on Pipestone Avenue has failed. People who live nearby say the abandoned building is becoming safety hazard.

"You know I have kids so if they were to go missing that's the first place to look," said Danielle Hall, another neighbor.

Hall has watched it deteriorate since InterCare Community Heath Network left the building nearly two years ago. She's worried about what will happen if something doesn't get done. "They need to do something positive with it or tear it down,” she said. You never know what you're going to find in it.”

"It's just a sight you don't want to see in your community," said Berrien County Treasurer Bret Witkowski.

Witkowski said Wednesday likely nothing will happen for some time. "I think people, for lack of a better word, got greedy and now the community is going to pay for that greed."

In May the deadline passed to use Neighborhood Stabilization Program grant money to knock the structure down.

Witkowski said the county approached the owners of the building, a Florida bank, about demolishing the site. The bank turned down the offer until it was too late to appropriate the money before the grant deadline May 16th.

“If we would have had six months to work on it to get the paperwork to the state and federal agencies it could have been done,” said Witkowski. He said the bank likely thought the building was worth more.

More than 100 abandoned houses have been demolished in Benton Harbor with the Neighborhood Stabilization Program grant funds. Witkowski said it was a “once-in-a-generation” opportunity to knock down Mercy Hospital.

Neighbors think something should have been done. "Anything except sit there," said Hall.

The name of the Florida bank is not known to Berrien County officials.