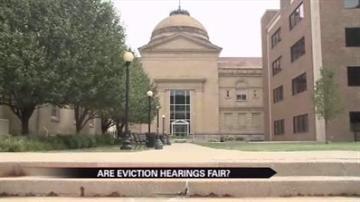 "The way the eviction process works in small claims court here in St Joseph County, is much to the benefit of landlords and much to the detriment of tenants,” said Hull.

Hull says the magistrates are short-changing the tenants.

“Whether or not the tenant owes rent, at least in the view of the landlord,” said Hull.

He says the magistrates are not interested in hearing any factors that may have led to the owed rent and he feels that is illegal.

"The Indiana Supreme Court has said that in an immediate possession hearing the tenant should be allowed to present any and all legal and equitable defenses,” said Hull.

Hull is referring to 2008 Indiana Supreme Court ruling. It says statements by a St. Joseph County judge showed inattention to the tenant’s defenses.

To see if this was still happening today, we sat in on the first few eviction hearings Thursday morning.

In one of them, the tenant was behind in rent, and tried to tell the judge there were repairs that needed to be done to the property that were being neglected.

The judge did not want to hear about that, instead he told the tenant they could file a counter claim, something she had no idea about.

After explaining what a counter claim was, he ruled the landlord could take immediate possession of the property.

The tenant said afterwards that the leasing agent moved her into a home that was not ready to be lived in.

Hull says this kind of defense should have been allowed.

We contacted Superior Court Judge David Chapleau to ask him about what we witnessed Thursday. He was concerned enough to want to look into it more, and said they want to make sure everyone is following the law.