August is the time for checking trees 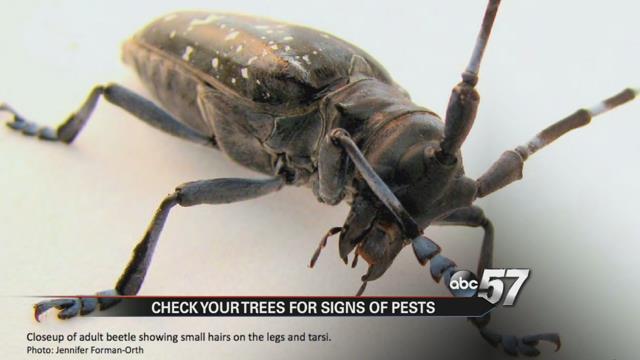 August is Tree Check Month because of an insect that is lethal for trees.

The Asian Longhorned Beetle was discovered in 1996 and since that time has destroyed thousands of trees in Ohio, Massachusetts,
New York, New Jersey, and Illinois. There are not any confirmed cases of the beetle in Michigan or Indiana but all states are considered at-risk.

“We’re trying to make sure we’re doing all that we can to prevent the introduction of Longhorned Beetle into Michigan,” said Jennifer Holton, Communications Director for Michigan Department of Agriculture and Rural Development.

August is the designated month because that is when these insects are most active.

“This is a national movement and is also one of the times when specifically for Asian Long horned Beetles which is really the focus of this month, it is when the adults are most active, so late summer early fall," Holton added.

The bugs can be identified by their six legs, jet-black, shiny body that is characterized by random white spots, and they are about an inch and a half in length.

It spends most of its life cycle eating through the inside of trees, eventually killing the targeted tree. The insect will burrow inside the tree and then lay eggs, while at the same time feeding off the trees nutrients.

“When the larvae hatch, they bury deep into the hardwood where insecticides can’t reach. The only way to be able to manage an infestation is to remove the tree,” said Holton.

There are several things to look for when doing a check-up on trees.

“Look at the bark, look and see if you have any bugs you don’t recognize, pull back the bark a little bit to see if you see any oval depressions where females might have laid eggs.”

Holton wants this to serve as a call to action for people to be on the lookout for this deadly beetle.

The beetle is only dangerous to plants, it is harmless for humans and pets.

For more information on what to look for when checking trees, click here.

Click here, for additional reading on the Asian Longhorned Beetle.