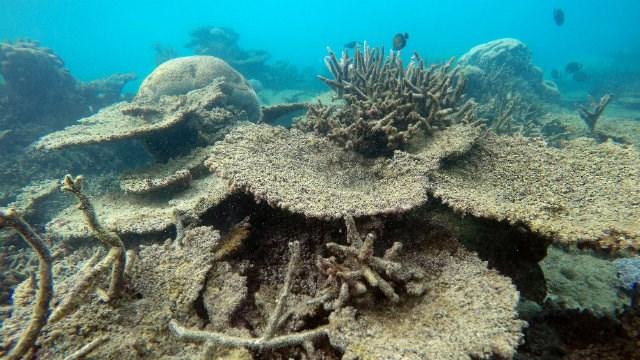 (CNN) -- Coral across Australia's Great Barrier Reef has suffered its most devastating die-off on record, a new report says

In just nine months, bleaching caused by warmer water has killed around 67% of the coral in a previously pristine part of the reef, one of the natural wonders of the world.

"We've seen three bleaching events (in the reef) and each time it can be explained by where the warm water was," the report's author, ARC Center of Excellent for Coral Reef Studies Director Terry Hughes, told CNN.

"In the north, the summer temperatures got up to two degrees above the normal maximum and that caused severe bleaching," he said.

Extensive aerial surveys and teams of divers were used to map the bleaching, which covered a length of 700 kilometers.

Hughes said it could take up to 15 years for coral to grow back to previous levels.

Threats to the reef have become so severe that in recent years UNESCO has suggested it could be placed on list of World Heritage sites "in danger."

A spokesman for Australia's Environment Minister Josh Frydenberg said a report on the status of the Great Barrier Reef to UNESCO was due by Friday, local time.

A decision on whether or not the reef will be declared "in danger" is expected within the next year, the spokesman added.

Most severe bleaching event yet

Two major coral bleaching events in the Great Barrier Reef took place in 1998 and 2002, but Hughes said this year's had been the most devastating.

"It's quite sobering, we've now seen three of these events, each one was more severe than the last and these have occurred with less than one degree of global warming," he said.

"Two degrees of global warming will mean these events are more severe."

Although the coral is expected to regrow, Hughes said a fourth or fifth major bleaching event in the next 15 years could damage the reef even further.

"It's too unpredictable for anyone to be sure when the next event will occur," he said.

Northern reef used to be 'pristine'

While the northern parts of the reef were damaged severely by the bleaching event, others survived almost entirely intact.

The Great Barrier Reef's southern third only suffered about 1% bleaching on average, the report said, mostly due to the arrival of Cyclone Winston in February this year.

"It brought temperatures in the bottom half of the reef down and saved it from what would have been a reef-wide bleaching event," Hughes said.

Hughes said the northern sections had previously been among the most pristine in the entire Great Barrier Reef, remaining untouched while the southern regions saw their coral drop by half in the past 30 years.

"It's hard to get to, so it's the part where there are more sharks, more crocodiles, more turtles, more coral. Unfortunately the 67 per cent loss we've detected means that pristine northern part is now in a worse condition than the lower part," he said.