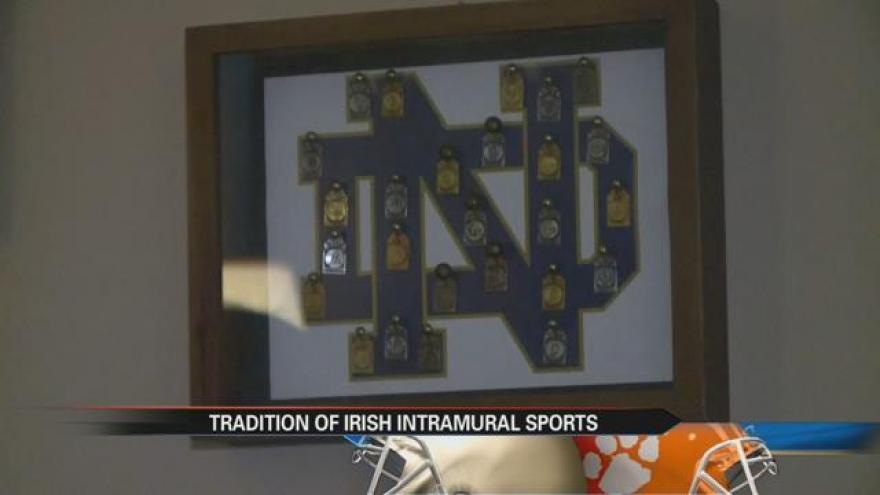 There’s no question the University of Notre Dame is rich in history, especially when it comes to sports. We often think of varsity football and basketball teams when we think of what shaped the university’s sports history, but there’s actually a lot more to it.

Before the football team ran out of the tunnel at Notre Dame Stadium, before basketball players ran up and down the court at Purcell Pavilion, before the Irish legends became what we know today, there were interhall sports.

David Brown, author of Games the Irish Play, says you may be surprised at how many historic Notre Dame figures helped make rec sports happen.

Brown set out on one of the greatest challenges of his career eight years ago.

“If you’re interested in the entire Notre Dame experience, this is really important to see this because this is such an important part of Notre Dame student life," Brown said.

Brown has served as the Assistant Director of Recreational Sports at the University of Notre Dame for the last 17 years.

In his time there, he learned just how important interhall sports are on campus.

“That goes back to Father Sorin’s vision of ‘the whole man’ concept," Brown said. “Sound mind, sound body, you need the recreation.”

After some encouragement from an old friend, he decided to write a book about it.

“This is a great story, it is worth preserving and it’s worth getting it out so people are aware of it," Brown said.

Brown worked to collect endless amounts of information, sifting through more than 1,000 photographs, all documenting these rec teams on campus dating all the way back to when the university was founded 173 years ago.

“Military drill was very big during the beginning of the university and these are some pictures showing it," said Brown.

He says all of that wasn’t quite enough.

“I wanted to make it more personal. The only way I could do that is write as many first-hand accounts as possible," Brown said.

“The gentleman in the middle, Father Farley, Pops Farley, the one who Farley Hall is named after, and this gentleman here, you’ll see his name down here. Not many people know that he was an interhall football coach," Brown said.

Brown says when he started his job at Notre Dame there were 11 club sports.

When he left this July there were 42.

You can order his book at gamestheirishplay.com or on Amazon or contact Brown via email.