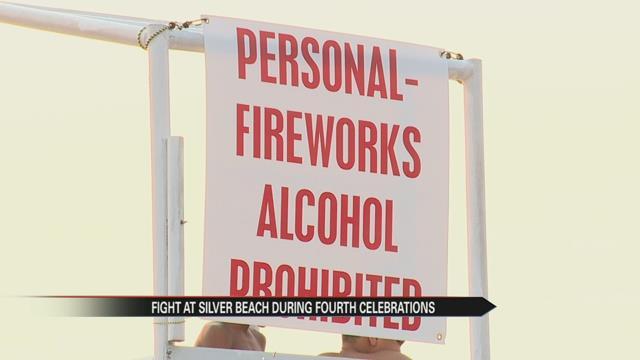 It was an unusually rowdy crowd for the Fourth of July at Silver Beach.

Police ended up making five arrests in a large crowd of young people who ended up fighting just before the fireworks.

“Some bottles, cups, footballs, just objects like that were there were thrown. There was some pushing and shoving and there were some fights,” Berrien County Undersheriff Chuck Heit said.

It’s something Krista Tolchin was shocked to witness. She is a mom who has been spending the Fourth of July at Silver Beach since she was a child.

“There just seemed to be more teenage crowds,” Tolchin said.

She wanted to keep her kids away from the crowds.

“We just had to keep them a little closer,” Tolchin said.

It’s families like Tolchin’s that police were most worried about when things got out of hand with the young adult group.

Alcohol and fireworks are prohibited at the park, but authorities say people in the riotous crowd broke that rule Saturday.

“We ask the people to either take the alcohol back to their vehicles or if they won’t do that to dump it out,” Director of the Berrien Parks Department, Brian Bailey said.

Within 30 minutes of the fight, five people were arrested -  two for controlled substances, two for disorderly conduct, and one for assault. One injury was also reported.

“We had to call out for additional assistance,” Heit said.

Heit says next year there will be more patrol on the beach, and they will crack down even harder on the no alcohol policy.

In the meantime, the parks department has been enlisting extra help to get Silver Beach cleaned up.

“We bring in extra staff from our other county parks. We work with the sheriff’s department inmate crew to come down the next morning. We get volunteers from the Michigan Army National Guard local chapter here,” Bailey said.