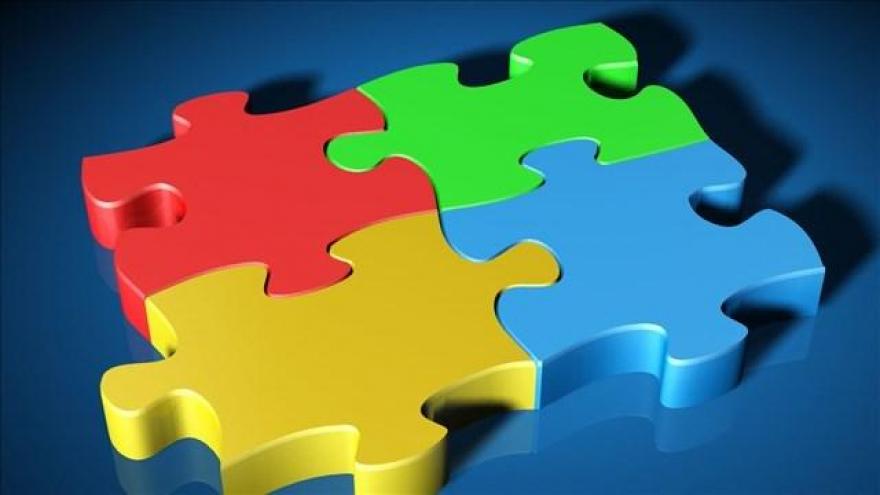 (CNN) -- It may be possible to predict whether an infant will go on to develop autism, researchers say.

Overgrowth in brain volume during the first year of life forecasts whether a child at high risk of developing autism spectrum disorder is likely to receive a diagnosis at age 2, according to a small study published Wednesday in the journal?Nature.

This new diagnostic method requires MRI brain scans to look for the features of autism, a developmental disability with behavioral symptoms that usually become obvious between ages 2 and 4.

Further research is needed before it can be developed into a tool for diagnosing infants at high risk of developing autism, said Heather Cody Hazlett, lead author of the study and a psychologist at the Carolina Institute for Developmental Disabilities and the University of North Carolina at Chapel Hill.

Common symptoms of autism include difficulty with communication and repetitive behaviors. In the United States, about one in 68 children has been identified with autism spectrum disorder, according to the Centers for Disease Control and Prevention. Yet, for infants who have an autistic sibling, the risk of developing the disorder may be as high as one in five. The risk is only one in 100 for infants without an affected sibling.

Hazlett and her colleagues studied two groups of infants: a high-risk group of 106 infants who had an older sibling with autism and a low-risk group of 42 infants with no immediate family history of autism.

The research team used MRI technology to measure brain development for each infant at set time points between 6 months and 24?months of age. Specifically, the research team measured overall volume, surface area and thickness of the cerebral cortex in particular regions.

Hazlett and her colleagues discovered an overgrowth of cortical surface area in infants later diagnosed with autism, compared with the typically developing infants.?

Next, the team developed an algorithm that predicted, based on all the brain measurements, about 80% of the 15 high-risk infants who would later meet the criteria for autism at 24 months. Using the algorithm, the researchers also made near-perfect predictions about which babies would not develop autism by age 2.

According to Dr. Joseph Piven, senior author of the study and a professor of psychiatry at the University of North Carolina at Chapel Hill, evidence from previous studies has showed that, compared with typically developing children, the brain volume of autistic children increased around age 2. These findings suggest "that brain overgrowth was happening before 2," Piven said.

At 24 months, the kids who developed autism had significantly bigger brains, according to Piven, "which means that sometime between 12 and 24 months, they were overgrowing the normal size of the brain."

The cerebral cortex is an outer layer of tissue covering the brain. Though it is about the size of a pizza, it has been crumpled to fit inside your skull, and the result is the brain's most distinctive feature: the many folds and wrinkles. Cortical thickness refers to the actual height of this outer layer of tissue, while cortical surface area measures the total stretch of topmost tissue by dipping into each and every fold.

"What we found was that cortical thickness didn't differ between the groups (of infants), but surface area increased at a higher rate than normal between 6 and 12 months of age" in the infants later diagnosed with autism, Piven said, referring to this as "hyper-expansion of cortical surface area."

Piven explained that even in typically developing babies, surface area is increasing rapidly at this stage of life, "but in the kids that had autism, it was even more accentuated."

"The expansion of cortical surface area is thought to be due to increased proliferation of something called neural progenitor cells. Those are immature pre-neurons," Piven said.

Another piece of this puzzle relates to behavior. Looking at the emergence of autistic behaviors, only the social symptoms of autism -- not the ritualistic repetitive behaviors -- related to increased brain growth rate, according to Piven.

Summing up the findings, Piven said a cascade of brain changes across the first two years of life "result in the emergence of autism at the end of the second year."

Early clues to other conditions

According to Mathew T. Pletcher, vice president and head of genomic discovery at the advocacy group Autism Speaks, the new study made great use of modern technology as well as a recognized phenomenon of autism: Children with a sibling diagnosed with autism are at much greater risk of developing the disorder.

Despite the important findings, the study "is still relatively small," Pletcher said. "The total study involved 148 infants. Out of that, only 15 of them ended up eventually being diagnosed with autism. At this point, it's hard to extrapolate whether these findings are going to apply to a much larger population."

"One of the things that has been shown over and over again is, the earlier you can begin an intervention," such as behavioral therapy for children with autism, "the greater the chance of limiting some of the characteristics of autism," Pletcher said. "That's why there's a lot of excitement around this study."

If it's possible to detect changes in brain development as early as 6 months to 12 months of age, you could conceivably begin working with an infant very early on and "try to help nurture their development in a way that's going to be most beneficial."

"Right now, we're at the point where generally, the age of diagnosis is 4, there's indications that say we should be able to diagnose kids at age 2, and now this is saying it could be even earlier than that," Pletcher said.

However, he noted that using expensive MRI technology to screen every baby for autism would probably be unrealistic. But the method might benefit at-risk populations, such as the younger siblings of those diagnosed with autism.

Despite the limitations of the new study, Pletcher marvels at the findings. "Right from the outset, there's something that's different about the brain development. We can see that now," he said. And, though he hopes the study translates to a "better understanding of autism, the mechanism, the biology and therefore potential new therapies," Pletcher acknowledges that repeating the results in a new group of children would be necessary before doctors might make use of this screening method.

"We have one project that we are hoping to get funded to replicate this (finding) with a new group of kids," Hazlett, said, adding that she, Piven and their colleagues are also hoping to follow the children from the original study until school age.

"We know a lot still changes and happens even beyond the second year, and we're very interested in observing that as well," Hazlett said. In particular, she hopes to watch the high-risk children with an autistic sibling -- those who were not diagnosed with autism at 24 months.

"They don't have autism necessarily, but they often are getting other problems, whether anxiety, learning problems or ADHD," she said. "It would be very interesting to see if we could find early clues to some of those issues as well."