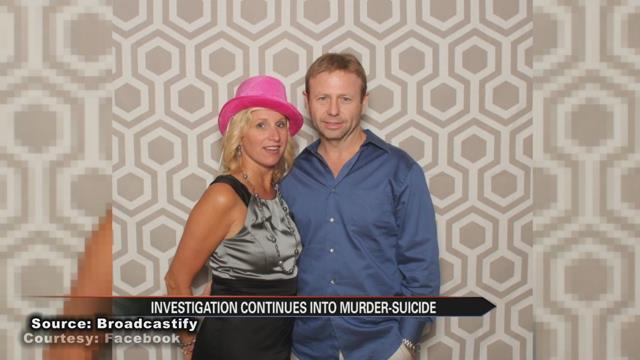 The preliminary autopsy results are in for Denise Bohn-Stewart and her husband, Eric.

According to Michigan State Police, Denise was shot multiple times in the upper torso and her death was ruled a homicide.

Police say Eric died from a single self-inflicted gunshot wound after killing his wife; his death was ruled a suicide.

The couple’s bodies were found in their Royalton Township home Tuesday morning by their three children.

“We have a child caller on the phone,” a Berrien County 9-1-1 dispatcher said. “He’s advising that he’s found his father. He believes he’s passed away in the basement; he does see blood all over.”

A chilling call dialed into the Berrien County dispatch center just after 6:30 a.m. Tuesday was the first tip to police that something had gone wrong inside a Royalton Township home.

“Units responding to Wyndwicke [Drive], our child that we have on the line is advising she cannot find her mother anywhere around,” the dispatcher said.

The three children who live inside the home, ages 8, 9 and 10, frantically called police after finding their father, 51-year-old Eric Stewart, in a pool of blood in the basement.

Officers raced to the scene as the children stayed on the line, telling police they could not find their mom, 45-year-old Denise Bohn-Stewart.

Officers arrived to find the three children waiting at the front door of their home and they were immediately taken to a squad car.

Within moments, police located Denise’s body in an upstairs bedroom.

“We’ve got one female, clearly deceased upstairs,” an officer radioed in.

Shortly after, they confirmed what the couple’s children had initially discovered.

Police allege Eric shot his wife multiple times, killing her before taking his own life.

Police also confirmed that no suicide note was found inside the home.

According to authorities, the handgun Eric used was purchased legally in 2012, but not in the state of Michigan or by Eric. It was not registered in his name either, indicating it was initially purchased by someone else.

Police said Wednesday there is no new information to indicate the crime was planned ahead of time, but officers did say Tuesday that there was a chance it was.

There are also reports that Eric quit his longtime job at the Cook Nuclear Plant in Bridgman on Monday, but police and a spokesperson for the plant could not confirm or deny that.

Denise was a cancer survivor who became an active member of the Susan G. Komen Foundation in southwest Michigan.

Her final Facebook post was about an upcoming race, Kalamazoo’s “Race for the Cure” on May 14, that she was fundraising for in anticipation of her team competing in it.

The director of the southwest Michigan Komen Foundation office said her organization will continue to fundraiser for both Denise’s three children and her race team.

You can donate to a fundraiser for the three Stewart children here and to Denise’s “Race for the Cure” team here.