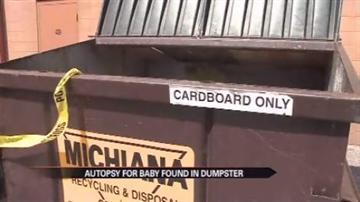 GRANGER, Ind. -- A premature baby was found dead in a dumpster behind a Granger restaurant after the woman who delivered the baby showed up at a local hospital. Investigators are trying to determine whether or not the baby was born alive.

Police say they may not have discovered what happened had the woman not sought treatment at St. Joseph Regional Medical Center Saturday night.

She originally said her baby was at home on Northampton Drive in the Fox Chase subdivision in Granger where she lives with her extended family.

She later said the baby was in a dumpster behind her family’s restaurant, the Moe’s Southwest Grill off University Drive in Granger.

Neighbors say the Patel family moved to Granger from Indy six years ago and they opened the restaurant.

A forensic pathologist has completed the physical examination of the baby, but is awaiting microscopic and toxicological results before determining cause of death.