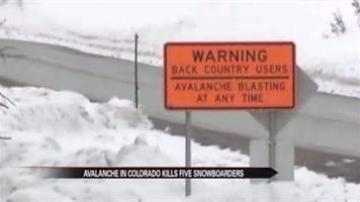 DENVER — A group of snowboarders were buried alive in Colorado's worst avalanche in 50 years.

Only one of the six snowboarders was found alive after the group set out in an out-of-bounds zone on Saturday.

It was more than two football fields wide and nearly four fields long.

This latest incident brings the number of people killed by avalanches this season to 24.

Although investigators say the men had the right safety gear, these were some of the worst conditions in 30 years.