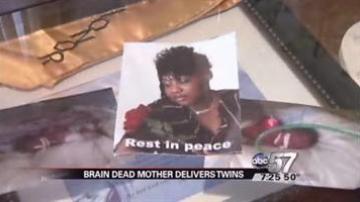 GRAND RAPIDS, Mich. -- Babies born to a mother, who had been brain dead for the previous month, are slowly improving.

A pregnant Michigan woman suffered a pair of brain aneurysms in March and collapsed.

The mother was brain dead, but was kept alive on a respirator as long as possible to allow her twins to develop more fully.

The woman's mother said that the twins are still very weak and are expected to stay in the hospital for up to five more months.

The woman's mother said, "It still hurts, I can't believe she's gone 26-years-old and all these babies back here, but God did it for a reason, I don't know what, but it's for a reason."

The babies, Nicholas and Alexander were born by cesarean section at 25 weeks, they are listed in critical condition.