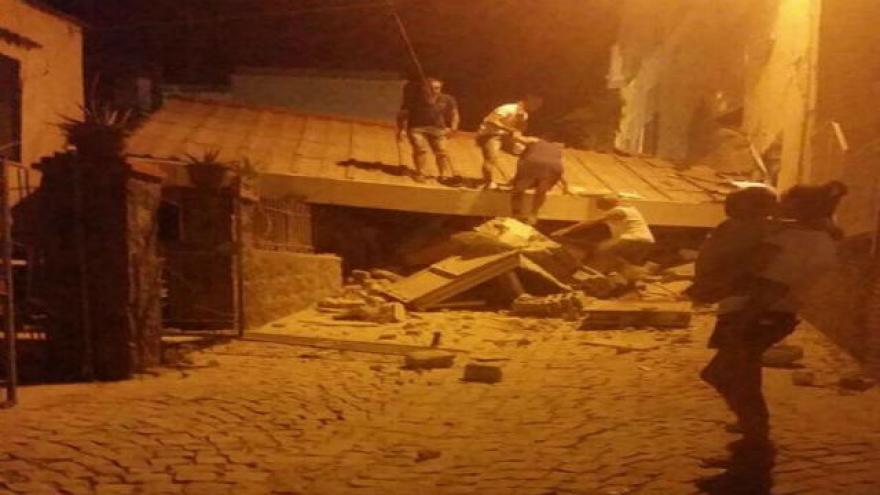 An earthquake struck the island of Ischia in the Gulf of Naples on August 21, 2017. Photo courtesy Giorgio Tirone

(CNN) -- A baby was rescued from the ruins of a house after an earthquake hit the Italian island of Ischia in the Gulf of Naples, according to a statement from the Department of Civil Protection.

Two people were killed in the earthquake, which struck late Monday. One victim, an elderly woman, was hit by debris as a church collapsed in the town of Casamicciola, said Col. Giovanni Salerno of the Finance Police Naples province unit.

The other, also a woman, was found under the rubble of a house, according to La Republicca newspaper.

Rescuers were trying to reach seven people trapped under rubble, including a 7-year-old boy, according to a police official.

La Republicca said that the seven were all members of a family who were trapped after the collapse of their home in the town of La Rita. One man, two women and the baby, a 7-month-old named Pasquale have already been rescued.

The fire service tweeted a photograph of the moment the baby was pulled from the collapsed building.

At least 25 injuries were reported on the resort island, according to public broadcaster RAI.

Over 1,000 people evacuated the island overnight, according to the Department of Civil Protection statement. They were "welcomed in Pozzuoli by the Red Cross volunteers (CRI) before making their own way further."

Helicopters are transporting the injured to hospitals in Naples, officials said.

The US Geological Survey said the earthquake had a magnitude of 4.3. Italian authorities earlier put it at 3.6.

Parts of the island were without power.