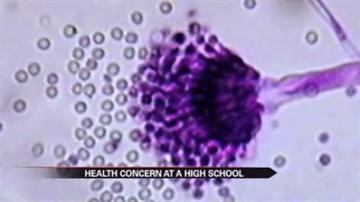 According to the Center for Disease Control, Bacterial meningitis is a disease that can inflame the tissues surrounding the brain and spinal cord.

It is a bloodstream infection that usually causes bleeding under the skin and it can be fatal if not treated right away.

Students were sent home with a letter on how to prevent getting the disease.

One student said his teacher gave a lecture on what the disease is and what symptoms to look out for.

“A lot of the students were panicking because they thought it was another threat,” said freshman Kyron Baker.

Baker says when his principal told teachers over the loudspeaker to check their email and read it to their class, he thought there was some sort of threat of violence.

But it was actually a threat of disease

“Somebody had meningitis,” said Baker.

There was a letter sent home to parents.

It explains the symptoms of meningitis which are a fever, stick neck, and a headache.

It also tells students not to share drinks with each other because Bacteria Meningitis is spread through saliva.

But even with this warning letter, Baker’s grandmother, Jenetta Hairston is still worried about his health.

Although most Bacterial Meningitis victims recover, there are serious complications such as brain damage, hearing loss, learning disabilities, and it can even be fatal if it isn’t treated early.

Hairston plans to talk to her doctor.

“I am going to follow up with the doctor and see if there is anything we should be doing,” said Hairston.