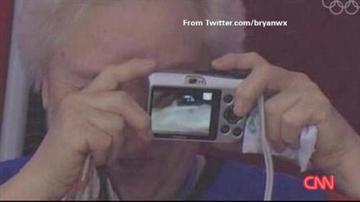 Millions of eyeballs are glued to the Olympics. And a lot of the buzz is turning out to be about eyeballs -- from Bob Costas' eye infection to a new picture that's getting a lot of laughs.

A woman thought her point and click camera was pointed at the Olympic hockey rink where Slovenia and Russia were battling it out.

But instead of shooting hockey, she's looking into the lens and shooting her own eyeball.

The eyeball has now become the second most famous eye at the Sochi Olympics. Second only to Olympic host Bob Costas' pink eye. He's now back at work, but he had to endure pirate jokes and comparisons to the Terminator.