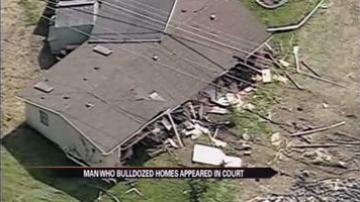 PORT ANGELES, Wash. — A man who police say went on a bull dozing rampage appeared in court on Monday.

The Washington State man is accused of bulldozing his way through his neighborhood.

Officer say that the man was angry with some neighbors and decided to destroy three homes.

They say he is a good guy. But also agree he should not have taken things this far.

A judge has set bail at $1 million.