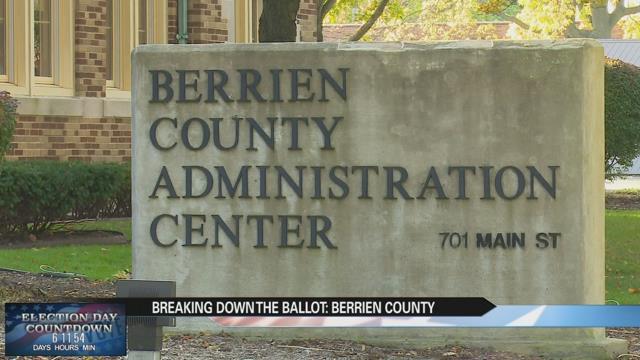 On top of statewide and national elections, voters in Berrien County have a lengthy list of local contested races to vote on.

“There’s some people who are not maybe as happy with the candidates, but they want to go out and place their vote because they know that every vote does count,” Berrien County Clerk Sharon Tyler said.

Tyler said that’s why voter registration is up in the county.

We saw voters hit the polls early in South Bend Monday, but Michigan does not have early voting; though people can vote absentee.

Tyler said, to date, nearly 12,000 absentee ballots have been cast in Berrien County.

But in downtown St. Joe Tuesday, there was trouble finding enthusiastic voters who are tuned in to their local races.

“It’s not that important because really, I just moved here a year or so ago,” St. Joseph resident Bob Evans said. “I came up out of Florida. So the local stuff here, I’m not really that well-versed on.”

It was also hard finding enthusiasm for any race at all in 2016.

“I’ve never really been into politics that much, so, yeah, I guess I’m not voting [for] anything,” St. Joseph resident Erik Gast said.

Berrien County residents have six contested county races to decide on this year:

There’s also the local U.S. House of Representatives race for the MI-6 seat, a highly contested race for mayor in the city of Niles, and two recall elections happening in the city of New Buffalo.

On top of that, there are school board races taking place in 17 Berrien County school districts:

Lastly, there is a county-wide millage proposal for Lake Michigan College.

Tyler said local races matter just as much – if not more – than national ones.

“It’s very important because it’s your future and you want somebody who carries your value to hear your voice,” she said.

Tyler said there was great enthusiasm in Berrien County in the presidential primary earlier this year, with 30-40 percent of voters turning out, compared to the average of 13-18 percent.

Among the long list of contested races in Berrien County, a few specific match-ups stand out for voters and local officials.

The first one is the race for mayor in the city of Niles.

"Right now, it's highly contested and there's gonna be a lot of passion and activity on that," Tyler said. "I saw that during the primary and it will continue on."

ABC57 was also in Niles on primary day, as political newbie Nick Shelton and Niles political veteran Bob Durm came out on top in their first charge at replacing the city's longtime mayor.

The winner on November 8 will be the first new mayor of Niles in nearly two decades.

But one county race to keep an eye on is for Michigan's 79th House district, where Marletta Seats and Kim LaSata are running to replace Representative Al Pscholka.

The winner will be the district's first woman representative.