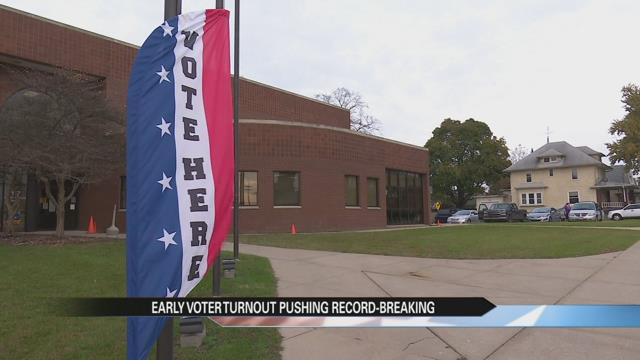 On top of statewide and national elections, voters in Elkhart County have several local contested races to vote on.

“People are very hyped up about this election,” Elkhart County Clerk Wendy Hudson said. “We have high absentee numbers. We are going to out-pace 2008, which was a record year for us.”

Elkhart County is on track for a potentially record-breaking election year.

But so far, this year, 10,602 early voters have cast their vote, with six days to go until Election Day.

Some early voters in Goshen said local races are the ones to pay the most attention to.

“They’re extremely important because they’re setting up the climate here within Goshen and Elkhart County, of which we have to live,” early voter Georgia Gouin said.

But in downtown Elkhart, residents said local races are not voters’ priorities.

“Honestly, it doesn’t matter who comes in office, there’s gonna be some type of mess up,” Elkhart County resident Shalree Thomas said.

There are also school board races happening in seven county school districts:

“We have such high absentee numbers that I don’t know if our Election Day numbers will beat 2008, but we will be very busy,” Hudson said.

Hudson also said voter registration is up 7-percent in Elkhart County compared to 2012.

Early voting takes place until Monday, November 7 at the Elkhart County Administration Building in Goshen and the Lincoln Center on Oakland Avenue in Elkhart.

Hudson said she thinks Elkhart County voters are tuned in this year because of the presidential race, and some early voters agreed.

"Most of the people I have spoken to are really tuned into the election because they feel that the results of this election are going to be very, very important to our country," Gouin said. "Some other people have just had it up to here and have totally tuned out."

Residents in downtown Elkhart said they're not only tuned out nationally, but locally too.

"I don't think that there is enough education that is readily available," Howard said.

When asked if she's heard much talk about the county races, Thomas said: "No, not really. I kind of try to stay out of that because, like I said, I'm not really political and I don't like seeing people argue about something like that."