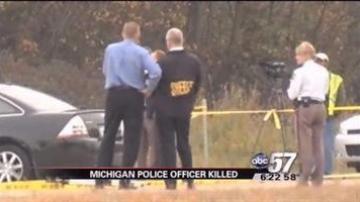 Police say Officer Trevor Slot was putting spike strips on I-96 on Thursday morning to stop a couple of bank robbers when they struck and killed him.

This all unfolded around 10:30 a.m. on Thursday about 15 miles northwest of Grand Rapids, Mich.

The guys drove in loops on the highway several times before stopping. Both men were then shot and killed by police.

"The suspects exited their vehicles; both armed and started firing upon the officers. The officers returned fire and both suspects were killed,” said Dave Roesler of the Michigan State Police.

He was just 41-years-old. He leaves behind a wife and two children.