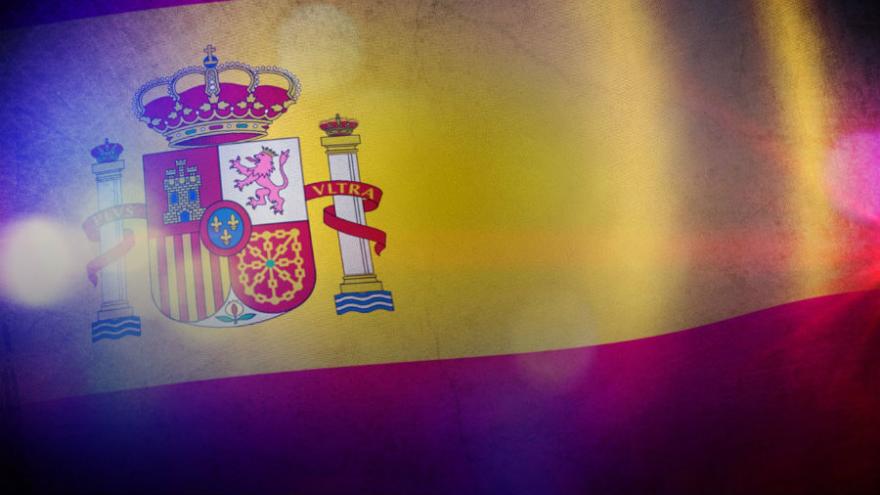 (CNN) -- Spain united in grief Sunday as hundreds gathered at Barcelona's famous Sagrada Familia to mourn those who lost their lives in last week's terror attack.

King Felipe and Queen Letizia joined hundreds of others to pray for the 14 people killed in Barcelona and Cambrils.

The memorial service comes three days after a a van plowed into pedestrians on Las Ramblas in the heart of Barcelona, killing 13 and injuring 120.

Police shot all five assailants dead but said late Friday it was "increasingly unlikely" that the Barcelona driver was among them, Reuters reported.

On Saturday, a Catalan police spokesman confirmed the names of three of the five suspects killed in Cambrils as Moussa Oukabir, Said Aallaa and Mohamed Hychami.

He also said that Younes Abouyaaqoub, who's wanted in connection with the Barcelona attack, remains on the run. Spanish media report that Abouyaaqoub is a 22-year-old Moroccan national.

Eight of the 12 lived in Ripoll, a city north of Barcelona. Three were arrested, one is unaccounted for, and another is one of the dead suspects, Oukabir. Another arrest was made in the village of Alcanar.

Oukabir's brother, Driss, was among those arrested. He turned himself into police when his identification was found in the Barcelona van, telling authorities he wasn't involved in the attack.

A man who claimed to be a cousin of the brothers said Moussa Oukabir was "brainwashed."

A woman who lives next to a mosque in the neighborhood told CNN that she had witnessed the Oukabir brothers attending the place of worship "every day for many years."

The ruins of the house in Alcanar, a quiet beach town about 125 miles (201 kilometers) south of Barcelona, may hold the key to unraveling the plans and methods of the terror cell.

Police suspect the property was being used as a base to make explosives that could have caused even more devastating attacks in Barcelona, Cambrils and possibly elsewhere had they not blown up prematurely.

Explosives experts brought in a bulldozer Saturday to clear rubble before conducting a number of controlled explosions at the site in Alcanar's Montecarlo area.

The city's vice mayor, Jordi Bort, told CNN the house belonged to a bank and the group had been squatting there illegally without its knowledge.

The town is home to a mix of yearlong residents and others who just spend holidays or weekends here, he said. Neighbors said they did not suspect any wrongdoing at the property.

The septic tank of the house, which had only one floor, was used as storage for the tanks and explosives, Bort said.

Police said Friday there were other "biological remains" found at the site, but it is unclear whether they belong to someone other than the person confirmed dead there.

Wednesday's explosion meant the attackers were unable to use material they were planning to deploy in the attacks, Catalan police Chief Josep Lluis Trapero said Friday.

The attack in Barcelona, capital of the Spanish region of Catalonia, was therefore "more rudimentary than they originally planned," Trapero said.

Trapero said the suspects in Alcanar had been trying to "make explosives out of butane gas among other things."

A source briefed on the investigation said a preliminary assessment indicated there were traces of the powerful explosive TATP in the rubble.

TATP is made by adding an acid to a mixture of acetone and hydrogen peroxide solution and can easily result in accidental detonation if mistakes occur in the preparation.

TATP was used in the November 2015 Paris attacks, the March 2016 Brussels bombings and the May bombing in Manchester, England.

Many of those who have successfully made TATP received some form of terrorist training.

ISIS issued a formal claim of responsibility for the two attacks Saturday. However, the extremist group did not provide any proof it carried out the attack or provide the names of the attackers or the number of them. There are also inconsistencies between ISIS' statement and the police version of events.

Inspector Albert Oliva, a spokesman for Catalan police, told CNN that investigators are still trying to determine what materials were in the home.

"We need to analyze carefully what caused the explosion, the elements that were inside the house," Oliva said.