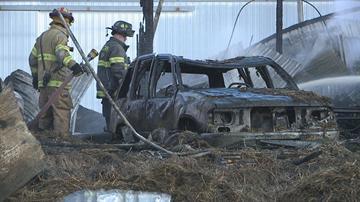 MARSHALL COUNTY, Ind. – Flames tore through a barn near the corner of 6th and Oak Road outside of Plymouth on Thursday afternoon.  Fire departments from Lakeville, North Liberty, Bremen, Polk Township, Bourbon, Walkerton, Koontz Lake, Plymouth and La Paz were all called to the scene to supply enough water to put out the flames.  According to firefighters, it was immediately apparent that the barn couldn’t be saved and they first worked at saving a nearby home.

“We had real heavy fire coming from the east side of the building, everything was extending towards the house,” described Assistant Chief Chris Oginsky of the La Paz-North Township Fire Department.  “The initial crews pulled a two-and-a-half-inch line; we concentrated on saving the house.”

The house was saved, though it sustained some smoke damage and heat from the fire melted siding on the home.  But, the barn, and everything inside it, couldn’t be saved.

"Probably had a good hour before we had the fire under control, so there was real heavy fire,” Oginsky explained.  “There was a lot of firewood in there, multiple vehicles, tractors, things of that nature."

One firefighter was injured, but not seriously, and had to be taken to Memorial Hospital.  There were no other injuries as a result of the fire.

"Fortunately nobody was killed, they didn't lost any animals just basically a lot of equipment and vehicles," Oginsky said.  “Everything in the building appears to be a total loss.”

The burnt out hulks of a number of cars and tractors stored inside the barn were all that was left standing as crews tore down the remains of the barn.

“We’ll probably be out tomorrow morning to start the investigation and we contacted the state fire marshal’s office to help us kind of sift through to see if we can come up with a cause of what started the fire,” Oginsky said.

According to Oginsky the total cost of damage caused by the fire could be as high as $250,000.